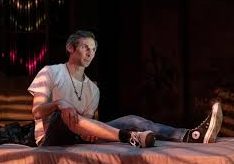 The plot shifts back and forth telling two stories. The first picks up the narrative with Hansen at death’s door, his body ravaged by his heroin addiction. He is unable to walk and has almost no flesh left to serve as a target for another injection. He barely has the strength to make a crucial 911 phone call, finally crying out for help. This portion of the play is the hardest to take. The unflinching descriptions of a junkie shooting up are presented in a harsh, but truthful light. Hansen is definitely not romanticizing the drug life.

The second story explores Tom’s early days growing up with a struggling family in North Seattle in the early 1970’s. His father, portrayed by the talented Brian Gunter, had resorted to earning a living by manning dangerous Alaskan fishing boats. In 1977 he had “had enough” and he perishes at sea. Tom goes on to lead a rocky youth, experiencing a number of bruises along the way and wandering in and out of trouble. Here Hansen seems to be exploring what might be the source and background of his eventual addiction.

He takes part in the very early stages of Seattle’ s grunge scene, playing guitar for the Fartz. Soon Hansen finds his way to heroin, because it felt so right. He explains that heroin literally goes “right to the heart.” In a virtuoso performance, Bond excels in playing both the younger version of Hansen and the ailing older addict.

Bond is joined by five cast mates displaying a great deal of versatility taking on many different parts. The cast so successfully peopled Hansen’s world that I was genuinely surprised to see only six actors come out for the curtain call. Particularly effective here was Jesica Avellone who took on the role of Hansen’s mother along with lots of other roles. Marco Adiak Voli portrayed a convincing rowdy band mate for Hansen as well as a credible health care provider.

Jones keeps the action moving swiftly throughout its 120-minute one act. She has the set changes move at a frenetic, breakneck speed; emphasizing the harrowing rapid fall Hansen is experiencing toward his dark and nearly deadly addiction. Jones is cognizant of the timeliness of Hansen’s story today. She observes in her notes that “The opioid crisis continues to claim lives in our country..Tom’s memoir sheds an unapologetic treatise on how this can happen to anyone.”

Book-It Repertory Theatre’s American Junkie runs through March 10 at the Center Theater in the Armory of the Seattle Center. For more ticket information go to Book-It.org.