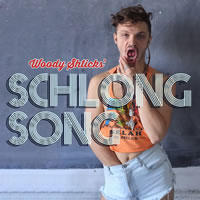 Too True Tales of Woody Shticks

Although to some, this blurb might indicate that the show is ever so slightly over-the-top, I can truthfully say that yes it was, but at the same time, it was also endearing, universal and highly entertaining. Read the review of the show I saw in February:

The ensuing upbeat hilarity, interspersed with some soulful introspection about growing up in a sexually and emotionally repressive family of the heavy duty Protestant variety, continued for a full hour, as the audience laughed, cried, and shrieked while bonding each other, in the intimate space.

Woody Shticks, who performed, wrote and I suspect improvised Schlong Song, had the writing skill of Oscar Wilde, the physical ability of Charlie Chaplin, the facial expressions of Zero Mostel, the charm of Hugh Grant and the combined genius of just about every comedian I have ever seen. Yes, it really was THAT good.

Indirectly, the first part of the evening touched on a universal subject which all of us, heterosexual, homosexual or otherwise, can relate to: how to deal with changing from a child into a sexual being, while still being dependent on our parents and living with them. This is particularly difficult in modern industrialized societies because the onset of puberty is early and economic independence is delayed, hence we have to live at home for a good 10 years, repressing our sexuality. In less developed, tribal societies, kids are married off with the onset of puberty and, at least for heterosexuals, can become sexually active.

Woody had it tougher than most, as he was born Gay into a religiously strict family, with a few dark family secrets. Fortunately for the rest of us, Woody was adventurous, risk-taking to the point of recklessness, insightful and a raconteur par excellence of his adolescent sexual adventures and mis-adventures. The humor was not just in the writing, which was incredible, it was also in the stellar delivery and his warm rapport with the audience

In the second half, Woody told us about going to a certain Central Asian country, described as combining the worst of the Soviet Union plus the most extreme version of religious intolerance from the Middle East. In this tale, he brought in the broader issue of gay repression in the universe outside of Seattle and San Francisco. Amid graphic but appropriate anatomical details, there was a poignant description of the painful consequences of expressing physical intimacy with those you love, in many parts of the world. Since his performance was emotionally honest, it touched everyone in the audience.

Structurally, this solo piece never let up, the pace was brisk, it flitted back and forth between the light-hearted and funny along with the sad and profound; there was never a dull moment and on a rainy February day, there was nothing I needed more than a good laugh. Mr. Shticks is a graduate of Cornish College of the Arts, where he studied Solo Performance under Keira McDonald, so they should be commended and thanked for providing Seattle with such a great entertainer.

Get your tickets now before it sells out. (NB. There is a short glimpse of an actual schlong i.e. male appendage, but it was not inappropriate under the circumstances.)

Incidentally, this is only one of the incredible pieces now playing at 18th and Union. They have only been in business for a few months, but they are on a roll, Parking is easy, there is a café next door, drinks and snacks are available in the big lobby, where an interesting photo exhibition is on display. The audience was friendly, we all talked and continued laughing afterwards. All in all it was a great evening out.

Larry Hohm delivers stories to both warm and chill your heart
December 7, 2022
© 2023 Drama in the Hood. All rights reserved.
Site Design