Cruel, life-changing, and—too often—deadly violence suffered by LGBTQ people formed the basis for this 90 minute dance/dramatic performance by the Spectrum Dance Company + Donald Byrd. Though the press release mentions the killing of 49 people and injuring of 58 others in the machine gun attack by Omar Mateen a year ago at the Pulse nightclub in Orlando, Byrd drew upon the sadder and much older outlaw “tradition” of anti-gay violence. Evoking the artistic monologuist styles that emerged in the 1990s during the peak of the AIDS Plague, Byrd continued his exploration of a “theater of disruption.” This style of theater uses all the tools available for performance on stage to, in Byrd’s words, “engage audiences in issues that are difficult and intractable, and importantly to move closer to disrupting the artificial and often arbitrary boundaries between dance and theater.”

In the Leo K Theatre at Seattle Rep, a near capacity audience at opening night watched the remarkable Spectrum dancers present this new work. Byrd organized the show into two sections. At the opening of Part One, we see the wild exuberance of the gay party scene, and one of the best segments is watching the male members of the company strut their stuff in a cat walk sequence. The music by Bob Ostertag and performed by Kronos Quartet is staccato and repetitive as often dance-party music is. The dancers wear white tights with random dark lines and t-shirt tops with spectacular graffiti designs. I think those shirts by Costume Designer Doris Black (see comments) would get a nice price at auction because they were so “fagulous,” to use a term from later in the show. 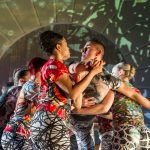 But the partying is brought up short by anti-gay violence. This is not an “issue” or a headline; its people’s lives. From this moment on, the show relentlessly makes it clear that this violence hurts, even kills real humans, real people. We hear David Wojnarowicz’s text from Being Queer in America: A Journal of Disintegration repeated several times—by recorded narration and also by one of the dancers, and lastly a projection on the back wall of Wojnarowicz reading it. This harrowing excerpt describes an incident of a gay man being beaten by a car-full of thugs while a crowd on mostly male onlookers did nothing. A friend escaped, ran home, and did not call the police. We watch as dancers fall, mimic being beaten, and fold in a fetal position to protect vital organs.

The dancers change costumes to gray hospital gowns as the show transitions into Part Two. Most of Part Two is actor Craig MacArthur performing a non-stop monologue. This is the world premiere of parts of Marrow by Brian Quirk. The nameless character lies in a coma with a black eye and bloody face. The monologue brings us inside his head as a clear and lucid part of his brain attempts to coach memory, sensation, connection, anything out of the comatose parts. Occasionally he jerks violently during seizures. During this time, there’s the steady beep-beep of the heart monitoring machine, and sometimes his image is project across his body making the experience of watching him a dual one: the projection made his suffering very large and close up while looking directing at him brought some distance.

This is the extended story of a young dancer who gay-haters beat into a coma with a pipe. Byrd and Quirk deliberately held our attention on this story of suffering and halting attempts to walk again, to remember again, to recall the loves of his life again. Just when you think it must stop, it doesn’t and continues. But that’s Byrd’s point, being in the audience is a safe place to allow oneself to deal with these feelings of outrage, discomfort, compassion, helplessness, sorrow, anger, etc. Out on the streets in public view, if one is different from what any random person or groups of persons prone to cruel acts thinks, one is continually at risk. Being in public, or even a private dance club, exposes LGBTQ people to great risks of physical violence every day.

This show is disruptive, and it is well worth your attention.

This is the final installment of 3 World Premiere productions included in Spectrum’s 2016-2017 season—AMERICAN: Race, Identity or Culture? They all deal with seemingly intractable issues: Shot, reviewed Jan. 20th, dealt with police shootings of unarmed black people, Rambunctious Iteration #3, returned by popular demand in March to explore the music of Immigrant-American classical composers; and now (Im)Pulse, a world premiere dramatic dance-theater response to the Orlando Pulse Nightclub tragedy and the ongoing aggression towards LBGTQ people.

6/19/17… The costumer design was initially inspired by the work of Shawn McQuate (his images are projected in part 1 of the show) – but Doris Black (costumer designer) felt because his work was pen and ink, it would be too dark. Moving forward, Doris was really inspired by the work of photographer Robert Carrithers and the work he did for a series on Club 57 during its heyday in New York. You can peruse some of his photos here: http://www.robertcarrithers.com/club-57/page/6/

From Doris: They all have this strong tone, a combination of graffiti art and use of color in a way that communicated a certain energy – angry with a hunger for change in our society. So I started looking for T-shirts and leggings that communicated that same energy. I also knew we would be using Shawn McQuate’s work for the projections. It has a certain all over scribble quality to it that we wanted and so I was excited when I found that I could order T-shirts and leggings from Society6 that would be printed all over using a sublimation process. They have a large group of artist’s work you can pick from. I kept searching through Society6.com until I had compiled a set that I thought would work well with the artwork by Shawn McQuate that would be projected over it.  It was very exciting to see it all come together in tech week with all the design elements and the dancer’s movement. The main artists whose T-shirts I selected were: Emmanuel Signorino, Matt Pecson, CAPTAINSILVA, AntWoman, Fernando Vieira, Rita Planchon, and Julián Callejo
Hopefully this answers the question!
Michelle S. Leyva, Michelle Sanders Communications
Mark: Yes it does. Thanks for the thoroughness.