Participating in the Here Lies Love experience invites the creation of new words. The Seattle Rep’s press release calls it a poperetta. I would propose to describe it as a disco-musical, a discusical. It requires new words for the spherical immersion in video, music, and sound effects. It invited a new format to match the self-aggrandizement, greed, and hubris of Ferdinand and Imelda Marcos’s rise to becoming the President of the Philippines. At the height of their power, Marcos asserted dictatorial powers, imposed curfews and martial law, and suppressed all opposition. Back then, and now tonight, in the pit and the balcony many people partied to the beat. Can it be so bad if everyone is having so much fun? As the DJ is encouraging everyone to get up and dance, we are swept along with the beat and miss the meaning in Don’t You Agree:

Here Lies Love began well before the first concert version of the songs premiered at the Adelaide Bank Festival in 2006. Long before that David Byrne (former front man for Talking Heads) was bored by news of Imelda Marcos’s legendary shoe hoard (reputedly about 3000 pairs). What caught his attention is she would jet around the world to dance at discos. After he had determined the concept for a set of songs to tell more of the story he uncovered in his research, he invited Fatboy Slim (Norman Cook) to collaborate on evoking the feeling of disco music of that era. Finding Alex Timbers to direct passed the baton to a third genius who has brilliantly packaged a fresh theatrical experience.

The show opened in New York in 2013 at the New York Public Theater and had two runs there before closing in January of 2015. In 2014, the show opened at London’s Dorfman Theatre, selling out in both cities. Many of the cast members in this production have performed their roles before in either New York, London, or both.

Before I forget, Byrne newest poperetta or discusical—Joan of Arc: Into the Fire, also directed by Timbers—is currently running in New York. Still, Byrne was easy to pick out in the dance pit at tonight’s Opening Night. He knows where the party is.

Here Lies Love is one of the first songs and it is was what Imelda jokingly said should be put on her tombstone. Despite the conflicts she had that are the story arcs of the show she may well get her wish. Currently 87, she returned to the Philippines and served four terms as a congresswoman after her husband died in 1989. Jaygee Macaupgay plays this pivotal role with great poise and grace when necessary, and hard-heartedness, too, when she wants to assert her power. Macapugay originally understudied the role and stepped into it full-time during the show’s second run in New York.

Imelda Marcos when a young woman.

Okay, Imelda, having called out love, what does it mean to be loved by one person who is not treated fairly by your family, and later by you? I’m referring to the poor woman who helped to look after her when she was a child, Estrella Cumpas (Melody Butiu). In several songs moving from their nearly shared poverty (Imelda may have been materially poor, but her family had some better-off members and social prominence), through Estrella being blocked from Imelda’s wedding party, to Imelda insisting on a meeting and offering a bribe for silence after Estrella writes a book about their mutual origins. Imelda lived the jet-setter life while Estrella’s was still mired in poverty. Still, as Estrella sings in their last encounter, there’s no shame in being poor.

Or again, what does it mean to draw the romantic attentions of both the future dictator of your country and the man who will lead the Opposition? Mark Bautista as Senator Ferdinand Marcos meets Imelda after Ninoy Aquinos (Conrad Ricamora) had. Aquinos eases out of the relationship because she is too tall. Interestingly, a historical detail that didn’t make it into the show, soon after Ferdinand met Imelda he carefully determined that he was taller than she was. Ferdinand serenades Imelda for eleven straight days, and this event gets its own song.

Back to love, Imelda, what does it mean when you discover Ferdinand has gotten one of his many mistresses pregnant? What type of conniving promise can you wring out of him then? From being an innocent small-town beauty queen, how much have you learned about how to use power yourself? Find out in one of the songs. 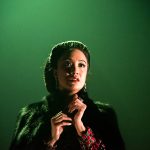 In total there are about 28 songs in the show, while the album had 22. Most of the newer songs are to fill in the story of the Opposition Leader, Ninoy Aquinos. The album itself is not a cast album, as it preceded the first theatrical production. Instead, Byrne recruited specific performers for each song based on how he imagined the vocals. Remarkably, Florence Welch (Florence + The Machine), Cyndi Lauper, Sharon Jones, Natalie Merchant (Cowboy Junkies), etc. all agreed to perform. A bit of the rich texture this lends the album remains in several songs where Imelda’s lines are sung by different performers.

Here’s what else you get: the Seattle Rep transformed into an elaborate disco like none I ever danced in. Trust me, I danced in many right in the middle of their glory in the 80s in New York. Still, to get us in the groove, there’s a huge stardust ball in the middle of the main stage in the middle of the room. The balcony has seats, and there are box seats on the balcony level as well. The best seats are not seats at all, but standing and dancing, and swiveling from one stage to the another as the performance unfolds. Every stage has wheels and also sliding runways that are telescoped in or out as needed. During a couple of songs the main platform is gently rotated as the performers sing and the audience in the pit slowly rotate with it.

Probably the best evidence that the show was firing on all cylinders was witnessing David Byrne give one of the stage hands a high-five near the end of the show. Indeed, this show is a 12 on a scale of 1-10. Seattle Rep has risked everything to bring it to us, show some love and catch it while you can.

Please visit SRT’s Synopsis page for alerts and reminders about this production.

Follow this link for special events & Speak Up! panels tied to this production.

Hey Mark,
Thanks for your review of HLL. I really appreciate your perspective on the show and I’m so glad you enjoyed it but I did want to point out a few inaccuracies in your post so you might be able to issue a correction:
1) You say “The show opened in New York in 2014 at the New York Public Theater”. That is not quite true. The original production at the Public began previews April 2 of 2013 and opened April 23 2013. It had 4 extensions and ran all the way through the summer before closing in late July. Then, a year later in April 2014, a new commercial run opened in the space space (The Public Theatre’s LuEsther Hall) and ran through the beginning of 2015.
2) You say Jaygee Macapugay was “the creator of the role in New York”. She was not. The role of Imelda was created by Ruthie Ann Miles. Jaygee joined the company in 2014 for the second run and she was the Imelda swing/understudy. She eventually took over the role full-time when Ruthie departed the production during its second run.
Thanks!
jakedeg
Thanks jakedeg for helping to improve my accuracy. I made the corrections in the review.
Mark