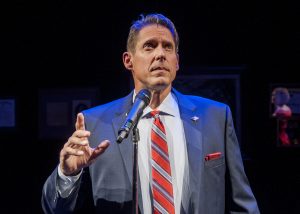 The news cycle for the 2016 presidential race has been full of stories questioning candidates’ personal and political integrity. In the midst of this contentious political climate, Taproot Theatre presents Suzanne Bradbeer’s The God Game. This nuanced, compelling drama explores a politician’s struggle to balance his career, religious views, integrity, and family.

Tom seems like the perfect vice-presidential candidate, except for his religious views. Can he fake them to further his career? He, his wife Lisa, and their friend Matt try to answer this question, and find that religion and politics, and their personal and political lives can’t be separated so easily.

Bradbeer’s script gives us an in-depth look at the type of people we often experience as soundbites. The characters are well-rounded and human. Tom is a Republican senator and veteran who cares deeply about climate change. His wife Lisa is a strong-willed woman of religious and moral conviction. Their friend Matt is a pragmatic political consultant who has remained closeted to further his career. The characters defy the stereotypes and labels so easy to apply to public figures, and come across like real people. 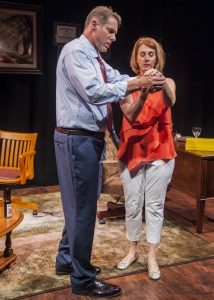 David Drummond and Nikki Visel in “The God Game”

Director Carol Roscoe, recently hired by Taproot, helms a watchable and entertaining production. The performances aren’t as nuanced as the script, but are enjoyable overall. Actors David Drummond, Cobey Mandarino, and Nikki Visel have great chemistry, and are believable as long-time friends. The technical aspects serve the story and the performances in ways one would expect for a black box theatre production.

I highly recommend Taproot Theatre’s The God Game. In such a heated political climate, it’s a breathe of fresh air to see such an in-depth and entertaining exploration of issues important to our democracy.