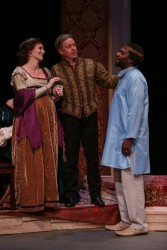 Seattle Shakespeare has chosen The Winter’s Tale to launch their 26th season. Believed to be the second to last script the Bard ever penned, the unusual play is filled with intriguing points and counterpoints as a devastating tragedy is ultimately averted in the later acts. The work has been described as a tragicomedy and presents many challenges for any acting troupe. Fortunately, the company has gathered some of Seattle’s most talented actors and technicians to present an earnest and remarkably thoughtful show.

The production is rooted around two outstanding performances: Darragh Kennan portrays the jealous king of Sicilia, Leontes and Brenda Joyner plays his falsely accused queen, Hermione. Kennan imbues his part with a startling naturalistic style. The king’s mad jealous rages and later overwhelming grief are all fully grounded and believable. Unlike Shakespeare’s Othello, here we have no conniving Iago pushing a tragic hero into unwarranted jealousy. All of Leontes’ misdeeds are his own making and he suffers greatly from both the gods’ condemnation and his own guilt. Kennan brings all of the monarch’s pain achingly alive. Joyner’s queen faces her husband’s angry attacks with an impressive strength. Her self-possessed dignity help make act two’s events much more believable.

The play’s second half, set in brightly lit Bohemia answers and resolves all of the tragic misfortunes of the earlier scenes in Sicilia. Director Sheila Daniels notes that it is up to the youth in this world to set aright the mistakes of their stubbornly proud and misguided parents. Here we find a charming Jasmine Jean Sim playing Leontes’ abandoned daughter Perdita and a spirited Rudy Roushdi taking on the role of her lover Florizel. These later scenes, which could be called The Summer Tale, are filled with goofy antics, word play, dance and song. Mark Fullerton as the Old Shepherd and MJ Sieber as a sly vagabond are particularly effective here. Sieber seems to be having a ball adlibbing with the audience before he goes to work on stage tricking some of the simpler Bohemian residents.

Spencer Hamp, fresh from his outstanding work in The Brothers K, does double duty as a member of the Sicilian court and a Boehmian bumpkin. Amy Thone, in her 12th show with the Seattle Shakespeare Company is the mysterious Paulina, Hermione’s best friend. Her character is able to pull off some exciting magic in the closing moments of the plot.

Set designer Tommer Peterson has done an admirable job differentiating the two settings. Sicilia’s stately walls transform into the lush trees of Bohemia in the blink of an eye. Kelly McDonald’s costumes effectively match the refined Sicilian characters and their more eccentric counterparts in Bohemia.

Seattle Shakespeare’s The Winter’s Tale runs through October 2 and is staged at the Leo K Theatre at Seattle Repertory in the Seattle Center. For more ticket information go seattleshakespeare.org or call 206-733-8222.