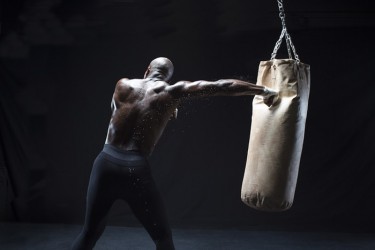 The Royale Packs a Profound Punch

ACT’s production of The Royale, the story of a black boxer from the Jim Crow era South taking on the white heavyweight champion of the world, draws strength from simplicity. Marco Ramirez’s (Sons of Anarchy and Orange is the New Black) script tells a no-frills story of passion, fame, family, race, and making seemingly impossibly choices. Loosley based on the story of 1908-1915 heavyweight champion Jack Johnson, we follow Jay “The Sport” Jackson’s life and struggles that come to a head in the ring, but have much wider-reaching consequences than he can imagine.

Jarrod M. Smith plays Jay Jackson with the charisma of a champion, the swagger of a notorious celebrity, and dignity of a person of conviction. The fight choreography performed by Smith and the charming Lorenzo Roberts is one of the highlights of the show, and the training with boxing coach Chris Denina clearly pays off. Veteran stage actors R. Hamilton Wright and G. Valmont Thomas both bring gravitas and humor to their supporting roles as Jackson’s trainer and fight promoter, respectively. I found Zenobia Taylor to be the only weak link in the cast. Her overwrought performance, and the fact that she is clearly a teenager playing an adult woman with an eleven-year-old son distracts at times from her character’s importance to Jackson and the story.

The work of costume designer Rose Pederson, scenic designer Carey Wong, and lighting designer Ben Zamora is for the most part beautifully minimal, but all have standout moments that improve the “spectacle” aspect of the production and have emotional impact. Sound designer Sharath Patel has probably the most unique contribution to the production: the powerful, organic beats he recorded with the actors that are skillfully employed throughout the show. These beats and the strength of the actors’ physical performances are clearest contributions of director Ameenah Kaplan. Her experiences as a director, actor, drummer, and choreographer make Kaplan perfectly suited to tell a story in which the characters’ bodies are so important.

ACT’s production of The Royale is a great play to see for a night for entertainment, emotional resonance, and critical thinking. Though it doesn’t exactly push the envelope stylistically, the show does explore challenging subject matter in a beautiful way, and confronts its audience to really think about serious issues from the Jim Crow era remain pervasive in our society today.