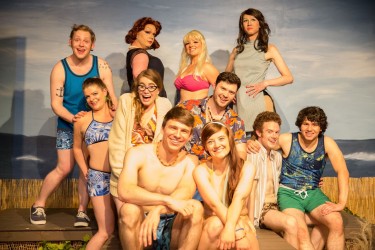 An artist run LGBTQ company, Fantastic Z opened a production of Psycho Beach Party by Charles Busch at Eclectic Theatre this weekend. As a left thinking person who believes in lesbian, gay, bisexual, transgender and queer rights, I would like to have liked this production; however, there is more to entertaining an audience for one hour and forty minutes, without an intermission, than just playing to clichéd, once shocking stereotypes, repetitive, superficial  humor and loud screechy voices.

Written in 2000, it is a parody of the 1950 psycho-dramas like Hitchock’s Psycho and Marnie, the Surfer movies of the early 1960’s which had a profound affect on the youth culture of the pre-hippie era, and the 1980’s slasher movies. They also threw in a lot of camp à la Joan Crawford.

The plot centers around a misfit at the beach named Chicklet, played by Helen Roundhill. Chicklet, unlike Annette Funicello, a former Mickey Mouseclub Musketeer and star of several Beach movies, was flat chested and wore her hair in pig tails and was a good student in school.  Unlike the buxom blonde, Marvel Ann, played by Jennifer Makenas, Chicklet hangs around the beach not to find a boyfriend but to actually learn to surf.

It turns out that Chicklet has multiple personality disorder and is responsible for various violent goings-on around the beach. Her love interest is a psychiatrist in training and all is revealed in a Freudian wrap up at the end.

In general, the script does not offer much hope for this otherwise talented group of actors. The dialogue is stilted and cartoonish, the plot is sooo predictable that it took some effort to sit through the play.  Whatever flaws there were in the script were magnified by the poor direction of the co-artistic directors, Kyle Baiz and Darren Johnson.

Everything was played with campy laughs, which got old very quickly.  Humor always falls flat if it is played for laughs, it is only when there is a profound connection with tragedy that human beings find humor in life’s situations.  Also, the characters shouted and screeched, which is always off-putting for an audience especially in a small space like the Eclectic.

Some of the audience laughed at the right spots, so if you like bad drag, lots of giggling, shouting, screeching and superficial humor, you may like this show. Be prepared to sit for one hour and forty minutes.