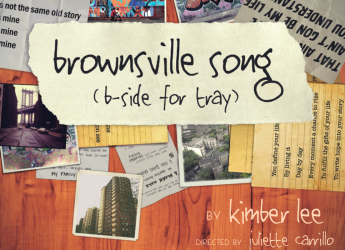 Kimber Lee set for herself in brownsville song: b-side for tray the task of providng the “other story” of someone like Tray Thompson. In real life, Tray Franklin was a black college student and winning amateur boxer who was one of three youth shot by gang members in Brownsville, Brooklyn in 2012. His friends survived, he did not.

Listen carefully to the opening monologue by Lena, Tray’s grandmother (Denise Burse) as she speaks apparently to the “press” or non-Brownsville society in general—”Tray was not …” she insists and repeats. Burse cries by the end of her long speech.

What is the b-side? On 45 RPM vinyl records Side A would have the hit single and Side B would be a lesser work. There’s another musical reference in structuring the opening this way as well: Lena’s speech is similar to the opening song in a musical. Lena’s song is not a sad song, though it has notes of grief. And Tray’s b-side song is not sad ultimately either, though he dies tragically before he had time to discover what other songs his life held.

Director Juliette Carrillo has sprinkled this production with some intriguing choices. Tray (Chinaza Uche) as he aspires to get out of Brownsville after high school and earn his college degree, must deal with competing roles demanded of him by Lena, his love for his younger sister Devine (played by Leah Delynn Dual), and the unexpected reappearance of his mother Merrill (Vanessa Kai). As the characters interact, they sometimes look past each other or one will speak their lines while facing the audience. It’s a though they are near each other in space yet remain emotionally apart.

The structure of this play is what playwright Paula Vogel calls “synthetic fragment.” It presents the co-existence of two time periods. We witness Lena and Divine from the insides of their experiences with this grief and trauma in scenes that may be a flashback memory or a current fantasy with the spirit or ghost of Tray. At times we are not sure, and this adds to the quality of the writing because people experiencing grief and trauma move fluidly between various mental states and time frames. Lena is suffering memory lapses and Divine has a fear of crowds and open spaces.

In their life together before Tray’s murder, Lena, Tray and Devine were holding tight to each other. Tray explains this to Merrill as Merrill tries to reconnect after her journey of recovery from drug addiction. Merrill, though the mother of Tray and Devine, literally abandoned them by walking away from the family. Merrill left the four year old Devine waiting outside a grocery store. Devine slept behind the dumpster overnight and Lena tracked her down the next morning.

Merrill slips back into Tray’s life by becoming his writing coach as he prepares his essay for a scholarship. She was a former high school teacher so had “street cred” to be of service. She just shows up at his boxing gym one day where he is getting ready for the Golden Gloves competition. He’d come in second the year before despite finishing his last fight in pain due to the aggravation of prior knee injury by the other boxer. Tray repeatedly displays tremendous grit: the capacity to hang in and finish what he starts. This same determination throws up walls and barriers to Merrill, understandably, as he, his sister, and his grandmother are not going to risk Merrill hurting them again.

Merrill’s addiction demons took hold when her husband (that is, Lena’s son and Tray and Devine’s father), was killed with four shots in the chest. After plummeting into her addictions around the time she abandoned Devine, with all of the cycles of sobriety and relapse, she never left Brownsville. She hid from the family when she saw them passing.

Lena and Devine are hardened to her, and her best chance to feel she belongs in this family is through Trey and helping him write an honest essay about himself. Lena’s existential challenge is to understand where she belongs and the roles and responsibilities that belonging carries. Before her husband was killed, the family took a trip to Philadelphia to see her Asian family-of-origin. Their racism led to an ugly scene at her parents’ front door. We don’t see this, we hear Tray retell it, though Merrill had hoped he had been too young to remember.

This was one of Lee’s first produced plays and I look forward to seeing more of her work. The feeling of the play, especially with opening monologues by Lena and Devine, is close to a documentary. This play is a type of eulogy for the Trays of our world. Yet, she could have pushed a little harder on our shared humanity and thus shared responsibilities to prevent future tragedies. There was no mention of any of the politics around gun violence or policing tactics like Stop and Frisk which critics felt overstepped Constitutional protected privacy rights.

Scenic Design by Mikiko Suzuki MacAdams provided smooth transitions between the many scene changes. The stage furniture glided silently on and off the stage. The back wall was a chain linked fence with view-blocking slats. In the center of the mural/graffiti was the slogan “Stronger Together” and across the whole length in capital letters was “BROWNVILLE.” It was the place where Tray and his family lived. Their struggle, and ours, too, is to also make it a safer place to call home.

Play Guides present additional information for teachers to help their students understand a production. Even if you are not a teacher, looking at the guides can point out issues or questions that might have been overlooked. Click through for Seattle Rep’s play guide. Long Wharf Theatre in New Haven also published a 46 page teacher information packet.