In Sound Theatre Company’s latest musical, Parade, we’re transported back in time to post Civil War Georgia where the terrible murder of 13 year old, Mary Phagan, shakes up the entire town. Based on true events, this is a show that forces you to critically examine the justice system and the lengths people go to in search of power as Leo Frank, a factory owner, is accused of murder.
Since this is a highly historical piece, as a viewer you’ll want to take a close look at the show program which features background for Parade and a timeline of events. While not completely necessary to fully understand the show, this will definitely help you recognize some of the more subtle, underlying themes such as racism and Judaism in the south during this period of time. Due to such heavy issues, this show isn’t recommended for young children.
Yes, all the events portrayed in this show take place in the early 1900s, but you’d be surprised how much of its content can be applicable to our day and age. Issues of injustice, racism, anti-Semitism and the role of the media are all extremely relevant today. The latter is particularly clear during “Real Big News” where the local journalist sings about how he’s going to get ahead in his career by sensationalizing Frank’s story. “You might never be sure if your motives are pure, but your profits are clear.” 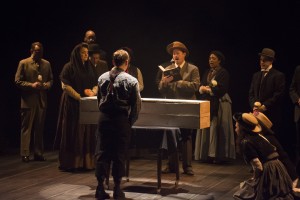 Aside from the acting and singing, something this show goes above and beyond in is the use of props and costumes. Often times with period pieces such as this, it can be difficult to find props and costumes that fit in, but Parade makes it look effortless. Both sides of the stage are lined with chairs where characters sit during many of the scenes reading the newspaper. As an audience member, if you’re close enough, you can peer down and read the headlines which make for a more realistic experience. It’s a small detail, but one that deserves praise.
While all the songs in this show are extremely powerful and moving, one of the standouts is “My Child Will Forgive Me” during the court room scene where she recalls the way she raised Mary. It’s a touching scene that makes you see how painful the death of a child can be.
Most of the musical revolves around Leo Frank’s trial and the aftermath of being found guilty, but even more important is how that affects his relationship with his wife, Lucille. In a town where everyone is trying to frame Leo, Lucille never leaves his side which can’t be an easy task. The on stage chemistry between both actors, Jeff Orton and Tori Spero, is amazing. You can see how close they are during “All the Wasted Time” which is one of the best songs in the entire show. It’s nearly impossible not to get teary eyed as you watch them sing to each other. 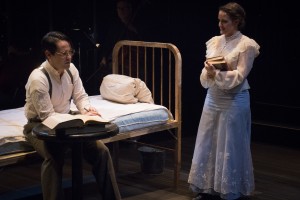 While ultimately Leo doesn’t get the happy ending we hoped he would, what we’re left with is much more important. As an audience member you leave with a better understanding of how cruel and unfair the world can be at times, but also with a longing for the truth which is something that never goes out of style.

Parade, a Sound Theatre Compary production directed by Troy Wafeman. At  At 12th Ave Arts in Seattle through March 26. For tickets visit soundtheatrecompany.org