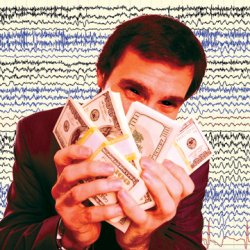 Whackjob by James Jordan as revised with Dan Gildark—both long-term members of the Boondogglers—sputters in many directions. Attending the final preview before its opening on Dec. 4, I found this production directed by Gildark, who also plays the lead, a mash-up of news, science, video projection, and theater.

What’s behind this? As Jordan explained in a pre-show “Cognition of Spectatorship” talk on preview night, there is great excitement in the research community on how our brains handle attention. He knows of what he speaks—since his time with the Boondogglers in the 90s (he wrote 5 plays for the company) he has studied neurology at Case Western University. Whackjob is both a play and a neurological experiment to study whether we humans have a different set of brain waves when watching theater than when watching a movie.

With so much going on, where does your attention go?

First, of course, we focus on the storyline. Using the same illogic that accepts corporations can be people, Jordon and Gildark posit that people can be corporations! Thus one Morrison “Mott” Waite, 7th Chief Justice of the Supreme Court, having incorporated his body as an LLC corporation during his lifetime is still alive. Gilbert plays Waite (AKA Mr. Corporation) as a psychopathic, drug abusing, CEO of the Pfizert pharmaceutical company. He blusters, bullies, bribes, connives, and bulldozes his way to the approval of a new erectile dysfunction drug, Boner-T. CEO’s don’t get their hands dirty doing real work, and in this case Waite is aided by the R & D services of a “Cognitive Scientist” played by Jordon.

This play holds a narrow view of power, and by that view 99% of the power is under the control of Mr. Corporation and his minions. A reporter from an alternative paper (“John” played by Griffin Jordon) and a deputy FDA Commissioner (played by Emily Gardens) offer wimpy resistance.

Second our attention falls on the research aspect of the show. Two volunteers were wired up to an electroencephalography (EEG) machine. Their EEG brainwaves were “broadcast” during the performance onto a screen where the audience could watch in real time.

Third, we scan the stage for what is interesting. On stage, of course, is the live action theater, plus at times, projected images would present a character Skyping in to talk with Waite, a photograph, a clever animation, a commercial, or a music video, and there was always the brainwaves that could be glanced at. This show at times reminded me of a 3-ring circus, which was developed in 1881 in the US. Dominique Jando’s critique of the multi-ring circus applies to this show: It could be argued that it changed the focus of the show to emphasize spectacle over artistry.

But parts of this spectacle are great fun. The animation by Emma Jordan and the portrayal of Georgia Senator F. Ecktard by Chris Coburn had the audience laughing. Throughout the play, watch for actors to appear and reappear in different roles. Don’t be surprised to see their names in the crew list as well.

“The court does not wish to hear argument on the question whether the provision in the Fourteenth Amendment to the Constitution, which forbids a State to deny to any person within its jurisdiction the equal protection of the laws, applies to these corporations. We are all of the opinion that it does.”

The show had a recent run in Vancouver and this is its Seattle premiere.