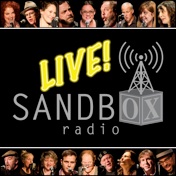 Although Sandbox Radio’s fall production Back to School, follows the format of a traditional radio program of instrumental and vocal music,  short dramatic sketches, PSA’s and advertisements,  it is so laden with irreverence, that it can hardly be called traditional.  For the audience, one of the delights of the evening was actually being part of the production, because the re-broadcast needed  audience participation to sound authentic.

Unlike any stage show, the audience gets to see the backstage goings-on, observing the MC cueing the actors, musicians, and sound, watching how the sound effects are made, as well as watching the mistakes and the scurrying of actors to and from the microphones. Even in the large Falls Theatre at ACT, there was a strong intimate connection between the audience and the cast, making everyone feel that they were part of the production.  Joyful was one word which sprung to mind.

The evening included the velvety voiced Leslie Law as a hilarious MC, the Sandbox Radio Orchestra of Dave Pascal ( bass), Dan Tierney ( drums) and Robertson Witmer ( accordion/clarinet) as well as vocal music by the Modern Angles comprised of Frances Leah King, Maggie Stenson, Vickielee Wolbach and Chris Monroe. In addition, there were short dramatic sketches by some of Seattle’s most beloved playwrights such as Elizabeth Heffron and Paul Mullin. All the actors were endowed with GREAT VOCAL ability as they had only their voices to project their characters with no set, costumes or physicality to prop them up.

Written by Beth Peterson, a Drama teacher at a Community college, School Wars opened the show.  The baby-boomers in the audience recognized it as a 60’s style violent student protest with the administrators of the college barricaded in the admin building.   Representing their academic disciplines, each professor argues about what to do using the jargon of their respective disciples. Peterson, brilliantly played by Rebecca Olson- a strung out drama teacher-favors a dramatic solution.  Hilariously, the sociology professor, played by Peter Dylan O’Connor, wants to discuss the sociology of the situation, rather than take cover. However, the particular demands have been updated to include contemporary touchy feely political correctness.   K.Brian Neel’s performance  as the student Robespierre was outstanding.  The author, Beth Peterson, a community college Drama teacher, certainly deserves some sort of prize-and a bullet proof vest!!!!

Steve Scher, a former KUOW broadcaster, entertained us not only with a tale of school bullying at his suburban elementary school but also with a spoof of other well-known KUOW antics. Elizabeth Heffron’s PSA about Scarecrow Video using topical Seattle jokes, involving a sexual encounter at our beloved video store, had everybody laughing in the aisles, again the star was Rebecca Olson.

The “Radio Noir” sketch, Taxi to Hell by Scot Auguston,  had Kathryn Van Meter brilliantly playing a cynical 40’s era “tough broad” private eye of a different species who takes on a case for the high mucky-mucks and stumbles on governmental corruption, greed, family betrayal and of course saves a fallen women from death and despair.

All in all, this was a wonderful evening, the acting, music, and singing were superb, being part of the audience was just plain delicious and watching the production of live radio was thrilling. Clearly, a huge revival of live radio is just around the corner as the computer/i-pod,/i-phone electronic revolution keeps advancing with Sandbox Radio is at the forefront.  Check out the website www.sandboxradio.org to download Back to School to the gadget of your choice to listen to the podcast.  (NB.  I take full responsibility for the excessive laughter on the podcast)