Blanket of Fear at ACT 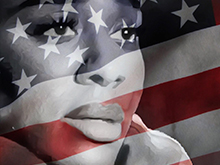 The 21st century challenges faced by Muslims, immigrants, people of color and their loved ones are explored in Blanket of Fear, currently on stage at the Eulalie Scandiuzzi Space in the ACT’s theatre complex.   The original production debuted in 2003 and was created by a writing team emerging from the creative ensemble Tribes Project. Though the quality of the production’s acting is uneven, the taut fifty-five minute show offers a number of effective moments highlighting the difficulty of finding truth and justice within the tense arena of counter-terrorism.

Julia (Amy Mayes) a white woman and converted Muslim, has recently married an African-Iranian American. She and her husband have been arrested at the airport where they were in route to Iran for their honeymoon. Julia is to be defended by a Cuban-American lawyer Evelyn (Dior Davenport) who appears to be highly conflicted by this assignment. A twist in the arrest is quickly introduced: unbeknownst to Julia, her husband has been accused of carrying over one hundred thousand dollars in a suitcase. With the stakes drastically raised, Julia now faces serious terrorism accusations. The play is much more concerned with the nature of the omnipresent fear that envelops Julia, her Iranian mother-in-law Fatima (Fereshte “Angel” Taherazer) and her lawyer than it is with resolving the initial conflict it introduces.

Davenport offers the most polished acting of the evening. Caught in her own anguish in coming to terms with her American-Cuban background, the lawyer has little patience for Julia’s dilemma. Davenport ably portrays a character walking a tightrope, trying so hard to live the perfect life of a successful American lawyer while simultaneously aching to reconnect with her Cuban roots. Davenport also skillfully portrays Julia’s husband Hassan, who appears in a number of back-story scenes that appear early in the production.

The play makes it clear that Julia, Evelyn and Fatima endure a myriad of problems, little of their own making. All three women must contend with the hardships and exclusion they face by living lives outside of the safety of white America.   Evelyn is overwhelmed by her professional duties.  Fatima who angered her Iranian family by marrying an African American, now has trouble accepting her new daughter-in-law Julia. Julia must face the anti-Muslim wrath of a post 9/11 U.S. when she chooses to adopt her husband’s religion.

Much of the innate fear that burdens the three women emanates from the powerlessness they experience in their predicaments. The show has some effective mime/dance movements when the women, each carrying some kind of blanket, join together, seemingly sharing their plights and gathering strength in that sharing.

A real highlight of the production is the music provided by singer Monica Barroga and horn player Kate Olson. Barroga beautifully performs a number of Billie Holiday songs accompanied by Olson who makes expert use of a looping device to build a very full sound. The sorrowful blues tunes nicely accentuate the anguish the three characters experience during the course of the show.

The Tribes Project has a very local connection. It originally emerged out of Ballard High School in 1997. The group’s production of this play, credited to Emy Johnston, Michaela Leslie-Rule, J. Paul Preseault and Angel Taherazer came in response to the anti-Muslim fervor after the Twin Towers fall. Sadly, the topic is still relevant today.

Blanket of Fear, a joint production by ACTLab and Tribes Project appears at the ACT, 700 Union Street, Seattle, through May 27. It is directed by J. Paul Preseault. For more information go to www.acttheatre.org or tribes-project.com.