GreenStage Achieves Rare Goal With Its Summer Production of Othello 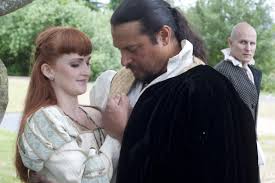 Only a handful of professional groups in the US have accomplished what GreenStage has now done with its Shakespeare in the Park production of Othello. It has produced Shakespeare’s complete canon. In its 26th year, the troop finally tackles one of the Bard’s most harrowing tragedies.

I caught this production at a matinee in Volunteer Park and marveled at the high energy and focus employed by the entire troop. While all the scenes may not have unfolded perfectly, and some of the play’s nuances may have been rushed over, the cast never flagged in its intensity and commitment to their task.

Johnny Patchamatla, in a magnificent thundering voice, captured the immensity and power of Othello’s grand heroic vision as well as any actor I’ve seen tackle this role. Othello demands that the elements of the earth reflect and echo his passions. Raging in jealousy, he assures Iago (Martyn G. Krouse) his murderous thoughts on avenging his unfaithful wife will be as direct as “the Pontic Sea/Whose icy current and compulsive course/ Ne’er feels retiring ebb.” We take this actor at his word; this is a mighty warrior indeed.

Libby Barnard’s Desdemona, works as a fascinating contrast to Patchamatla’s ponderous take on Othello. In the opening scenes, director Teresa Thuman has the giddy, giggling young bride flit and flirt with the general. She playfully keeps him from his heavy workload by snatching away his notebooks and demanding his loving attention.   When his dark accusations of infidelity finally come crashing down, her confusion and loss are nearly palpable.

Craig Peterson was particularly delightful as Cassio, the smooth talking lieutenant that is one of Iago’s targets; falsely called out for cheating with Desdemona. His drunk scene is a show stopper, as he spins and totters with Charley Chaplin like grace. His later scenes, where he must desperately plead with Desdemona to help improve his standing with Othello, are also quite effective.

Seventeenth century audiences found the final scenes of this play so upsetting they allowed their contemporary playwrights to alter the violent dénouement.   It is tough going indeed. Even when we know what is coming, the murder of Desdemona is nearly overwhelming and really not for younger playgoers. GreenStage pulls no punches here; the effect is devastating.

After the explosive tragic action, Othello’s final lines declaring he “loved not wisely but too well” are skillfully delivered with sorrowful recognition. Indeed the play and its players seemed to gather strength throughout the afternoon in the park and can be proud of their solid rendition of Shakespeare’s classic tragedy and the completion of presenting his entire canon. As the GreenStage staff joyfully proclaimed before and after the production, “Kaboom!”

GreenStage’s Othello runs in tandem with Love’s Labour’s Lost through August 16. For information on dates and locations go to www.greenstage.org