Mirth Curbed by the Heavy Crown 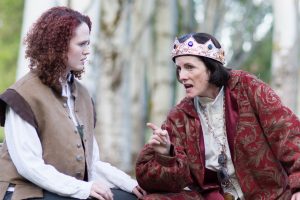 Henry IV Part 2, one of Shakespeare’s history plays features one of the bard’s most brilliant comic characters, Falstaff. Prepared for Falstaff’s relentless pursuit of revelry and propensity for deception by this play’s precursor, (Henry IV part 1), audiences won’t be disappointed. Greenstage, celebrating its 31st anniversary gives us a strong Falstaff played heartily by Michelle Lyn Conklin. Ever the one to gamble with the truth Falstaff has secured a false reputation, claiming a heroes’ status for killing Hostpur, the brave young leader of the rebel forces when in fact it was his friend Prince Hal, heir to the throne who did the deed. Falsehood is a way of life for Falstaff as his name not too unsubtlety proclaims. Falstaff has also been deceiving Mistress Quickly (played deftly by Mary Murfin Bayley) the dim-witted tavern hostess into believing that he’ll marry her, when his sole intention is to wheedle food and booze from her. All situations serious or not are an occasion for Falstaff to weasel out of the truth and weasel out of responsibility; his main aim is to have fun regardless of the consequences and to make sure he’s taken care of at other’s expense.

Falstaff’s recklessness and allergy to responsibility are juxtaposed with the grave situation of the Kingdom. King Henry IV has secured a tenuous victory with the help of his capable sons Prince Hal and Prince John of Lancaster, but the King’s proximity to death’s door threatens to destabilize the health and future of the nation. As the King proclaims, “uneasy lies the head that wears a crown.” The ruler of the land is weighed down by the massive responsibility for his subjects in maintaining the peace and ensuring their prosperity. Unfortunately, Prince Hal (played competently by Aubrey Sara Kaye) is not a well-rounded, suitable heir. Prince Hal has despite his military prowess, developed a reputation as a delinquent. A fast friend of Falstaff, Hal is also prone to revelry before responsibility. In fact, Hal reverts to type early in the play, conspiring with his friend Poins to disguise himself as a waiter to trick Falstaff for a laugh. What makes this act so despicable is that Hal jokes, well aware that his father lays gravely ill.

The play continues this pattern of alternating humor with seriousness with the bulk of the humor being provided by Falstaff and his close associates. In fact, Prince Hal though pivotal to the storyline looms small in the action. His big role is realized in Shakespeare’s subsequent play Henry V, but in this play Prince Hal is more of a foil to Falstaff.  Falstaff is by far the funnier fellow on this stage. When Prince Hal finally steps up and realizes his role as a sensible, serious ruler he must shed his skin and inevitably shed his allegiances with any lowlifes like Falstaff who would derail his ascendancy. The irony at the close of the play being that deception is once again a tool to be wielded-this time by Prince Hal (now King Henry V).  When Falstaff rocks up to the court expecting to be welcomed with open arms, the new King rejects him with the line, “I know thee not, old man.” Prince Hal might have known Falstaff but as King Henry he claims not to know him, because the truth is inconvenient.

Much praise to the cast and crew of Henry IV, Part 2. Directed by Chis Shea, this version of the play is well-thought out. There are no props apart from some folding metal chairs that are re-positioned periodically by the players to signify a change in scene. Dan Ruiz Salvatura gives an entertaining performance as Doll Tearsheet, the temptress who competes with Mistress Quickly for Falstaff’s affection. Whether serious or clowning around, the cast manages to hit all the right notes in this entertaining version of  Henry IV, Part 2.

Henry IV, Part 2 by William Shakespeare. A Greenstage production, as part of Shakespeare in the Park. Located at various outdoor locations in and around Seattle from July 12-August 17. Free and open to the public. For more information visit Greenstage.org.

GreenStage Opens its 30th Season with the Excellent King Henry IV Part I
July 16, 2018
© 2021 Drama in the Hood. All rights reserved.
Site Design