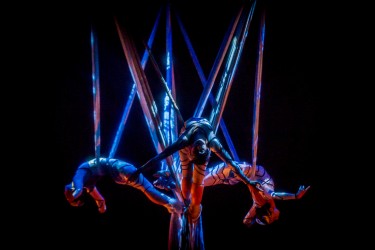 Archetypes of the dreaming unconscious prevail in this hybrid of folk-tales and circus.  Rooted in tribal dancing, trapeze, and eye popping costumes and masks TEWAZ, written by John Murray and directed by Marshall Garfield, is an experience that can only be compared to Cirque du Soleil. While this comparison is apt it must be remembered that TEWAZ is not a circus, but a spiritual journey that utilizes trapeze and acrobatics to tell a story: a story of the unconscious mind, and tribal archetypes such as warriors, heroes, changelings, and angels.

While many circus performances are spectacles, TEWAZ goes beyond the spectacle and enters into the realm of unknowns where aether and dreams take center stage, while drums and projections serve as backdrop.

The performance is broken up into seven sections including the prologue.  The piece is a true collaboration that follows the story of a woman named An’ah (Lauren Kettner), but don’t rely upon the spectacle to tell the story, the program has been set aside for that, leaving the audience to enjoy the sights and sounds and referring to the written word for guidance through the plot.

With highflying battles and acrobatic leopards, TEWAZ feels grounded in aether where power, death, flying, and dance become themes, and the confounding nature of the unconscious dream world becomes reality.

Let go of expectations of theater and go check out TEWAZ, otherwise you won’t be prepared for the second installment of the Cabiri and their TEA trilogy.