Julius Caesar tells the story of a group of conspirators whose well-meaning assassination of an aspiring tyrant tears their country and lives apart. It was first performed at the Globe Theater in 1599, and the tensions in the play may be a reflection on the political climate in England at the time. Queen Elizabeth was elderly and had not named a successor, so the possibility for a contested throne and civil war loomed. Adaptations of Julius Caesar have often featured contemporary political references. Orson Welles’s 1937 production famously costumed the cast in uniforms similar to those of European fascist troops at the time. Caesars resembling Margaret Thatcher, Barack Obama, and, as in the controversial Public Theater performance from earlier this year, Donald Trump, have all been killed on stage.

Seattle Shakespeare Company’s Julius Caesar is at its strongest when it leans into the present-day parallels. Craig B. Wollam’s set effectively brings to mind both the white-columned buildings of Rome and our nation’s capital. Doris Black’s costumes firmly anchor the production in present day Washington, D.C., from the power suits to an orange toupee. The physical world of the play helps the classic feel vital and relevant in 2017. The contemporary design certainly contributes to some audience reactions (most notably to the “He is a dreamer” description of the soothsayer and the use of the word “climate” when one character assigns metaphysical meaning to some natural disasters.) 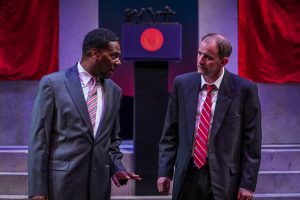 The strong ensemble cast’s performances fit right in with this aesthetic. These actors have some of the least labored, most conversational delivery of Shakespearean dialogue I’ve ever heard, and it is extremely effective. Iconic lines you’ve heard a thousand times, possibly without knowing they were from Shakespeare, sound fresh coming from this cast. Peter Crook gives a charismatic, well-rounded performance as Caesar; one that makes you understand why crowds cheer him, the Senate wants to crown him, and the conspirators think he’s dangerous enough to need killing. Bradford Farwell finds a perfect wise mentor/used car salesman balance as Cassius. Lorenzo Roberts’s Mark Anthony feels scarily like a young, handsome politician that could show up to give an early convention speech in real life. Reginald Andre Jackson plays Brutus with a combination of ambiguity and everyman charm that keeps you rooting for him, but questioning his motives. If Seattle Shakespeare Company’s Julius Caesar was just this cast doing the play in present-day costumes and set, it would be an early contender for the strongest play of the 2017-2018 season.

However, this show has many glaring weaknesses that slowly spread and consume the entire production. Jarring and unnecessary music cues bump a few scenes off-course. As is often the case in plays with crowd scenes, the crowd scenes require a lot more suspension of disbelief than the rest of the show. This only gets worse when it comes to scenes that involve fighting and rioting. There are no convincing or moving deaths, despite many of them having a lot of build-up in the script and featuring characters in which we’ve become invested. Even Caesar’s assassination comes across unbelievable and goofy due to the scene’s choreography, and the use of bizarrely anachronistic daggers. 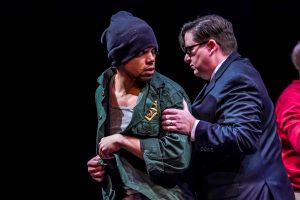 The daggers are the first sign of a stylistic shift that the production fully commits to after intermission. We return to our seats to find that civil war has broken out, and all the characters are clad in giant t-shirts and sub-Party-City-quality Roman Soldier Armor Costumes ™. The play is fully set in Ancient Rome now for some reason, but a way lower-rent version of Rome than their D.C. This baffling design choice combined with the second half of the play’s abundance of less-than-engaging fight scenes and overdramatic deaths results in a disappointing ending for a show that started off exciting and full of promise.

Shakespeare’s Julius Caesar is a timeless and always relevant classic. Seattle Shakespeare Company’s  production of Julius Caesar features some very good Shakespearean acting. Its first half is thought-provoking and near-perfectly executed, but the production as a whole is marred by a very weak second half and some baffling design choices.