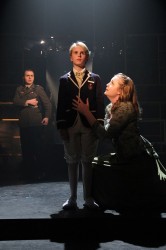 Seattle Musical Theatre’s production of “The Who’s Tommy” may not quite be The Who onstage, but anyone — whether you have enjoyed the songs and guessed at the murky story behind the 1969 album release or not — will take delight in this lively and uplifting production.

The artistic vision of the show’s director and choreographer, Harry Turpin, succeeds in binding up the loose-knit pieces of Pete Townsend’s 45-year-old flawed masterpiece with rare and memorable wholeness and a genuine healing touch.

A vivid “steam-punk” industrial set of scaffolds and levels, smoke and mirrors, lights and ladders, provides a rich and ever-changing canvas for the talented 17-member ensemble and four-piece band. The entire staging effectively suggests the rapid-paced playfield of an enormous pinball machine, with lights, bells, and enough surprising twists and turns to keep the audience constantly engaged and entertained.

Turpin makes use of every area of the complex set, with swift transitions, entrances and exits that surprise and draw the eye in many directions. His ever-busy stage is never cluttered; among the talented, hard-working ensemble no moment appears misplaced or unmotivated. 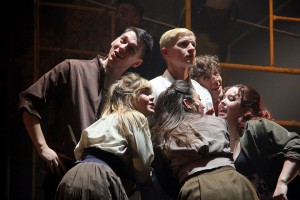 An early series of rapid pantomime vignettes establishes the back story of the war, Captain Walker’s disappearance and return, and the trauma of young Tommy, played with remarkable composure and presence by 11-year-old Jaryn Lasentia.

Caleb Dietzel’s ambitious and complex technical design is stunning. The lighting array seizes key moments and action with pinpoint precision, and dazzlingly energizes musical numbers. Actors clamber and leap amidst the scaffolding like so many pinballs; ensemble members appear in enough guises and settings to gradually acquire distinct individuality.

Visual creations such as the ghostly images of younger/older Tommy in a semi-translucent mirror stand out memorably. Vivid sound effects of pinball, breaking mirror, aerial bombardment, and more add to the sharp soundtrack. One feels swept along through a series of connected, feverish dreams, lucid and so engrossing one forgets to blink.

Among the many fine actors and singers, some standouts include Young Tommy, whose clear, pitch-perfect solo moments and duets are riveting; Kelsey Hull and Casey Raiha as Tommy’s emotionally conflicted parents; Curtis Jacobson as the tippling clown and remorseful pedophile, Uncle Ernie, in a role that could easily induce queasiness but for its sensitive treatment by actor and director alike; and Robert Barnts-McAulay as the older Tommy, whose virtuosic vocal range and power overcome occasional reediness and help him carry the show despite some stiffness and over-reliance on conventional musical theater movement and gesture. 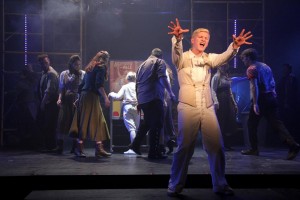 The show is visually and musically appealing, with a breadth of imagination and depth of commitment that easily glosses over minor weaknesses to produce an unforgettable and thoroughly enjoyable evening’s entertainment. Visit the production’s Facebook page for possible Groupon discounts.