In 1970, Andrew Lloyd Webber and Tim Rice knocked theater, religion, and rock music together on their heads. When they created “Jesus Christ: Superstar,” they took what is reported about the last week of the life of Christ, bent it to their will, and added a rock and roll soundtrack. That would have been enough, but it wasn’t enough for the writing team. The playwrights focused the action largely through the eyes of Judas Iscariot, history’s best-known traitor. This weekend, Tacoma Little Theater opened Jesus Christ: Superstar as a keynote to their 99th season of shows. The capacity crowd roared its approval of the tense drama and the actors who made it their own.

First of all, the base story of Jesus Christ: Superstar was a dangerous undertaking for anyone hoping for Universal approval. In fact, it is fraught with automatic detractors. Unbelievers would dismiss it out of hand. Believers would see the story as incomplete, ending before the Resurrection that is at the heart of their theology. That said, let’s look at what we know, for sure, before diving into this particular production.

We know that Jesus was a historical figure, who spoke truth to power, upsetting entrenched authority. We know his followers were many, under His spell of personality and charisma. We’re told He had a special ability to provide for the poor, lame, halt, and hungry. We know that (then and now) power is jealously protective of its place in society. With power comes wealth and who doesn’t want to hold on to that with both hands and an Army of soldiers? Lame and halt, bah, humbug!

Jesus was a champion of the 99%. That didn’t sit well with the 1% in the halls of Roman authority. 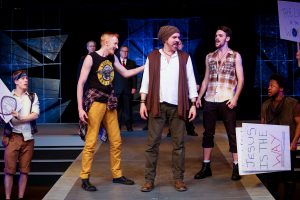 In Tacoma Little Theatre’s rendition, veteran actor Bruce Haasl plays Jesus. Director Lexi Barnett had a number of reasons to choose Haasl for the key part. One must wonder, though, if he wasn’t chosen for his kind eyes. As Haasl wrestles with what his character knows must come to pass, he never fails to look upon those who love him with tender gentleness. The audience may never know whether Mr. Haasl is kind, but they leave the theater knowing his character is endowed profoundly with the quality. Ms. Barnett scored, big time, with her casting decision.

As stated earlier, though, Jesus is key to the action, but Judas is the eyes through which we see the scenes play out. Loucas T. Curry fairly sweats blood as he is confronted with his disillusionment about the direction of Jesus’ ministry. As the group bookkeeper, he may well have been greedy, too. When the time came to betray his Master, Judas dithered and then took the cash. Mr. Curry acts with furious focus and sings with angst and power. Bruce Haasl is the more tuneful, to be sure. But, Loucas Curry expresses himself through songs of passion and heartbreak.

Mary Magdelene plays an important role in this show, as she did in the life of Jesus and His apostolic posse. Who (and what) Mary was, we don’t know. In Webber and Rice’s “Superstar,” though, it’s the popular narrative. She’s a woman with a past. The lyrics to the famous song, “I Don’t Know How to Love Him,” settle that. The great Yvonne Elliman played Mary on Broadway. Could Allie Milburn, in her Tacoma Little Theatre debut, pull it off. Yes, she can and yes she did! Ms. Milburn has honed her skill in Olympia-area theaters, but she is capable of great things. More than a woman in love, Mary was a woman in existential crisis! Allie Millburn hit every note, whether in song or word, beautifully.

Jesus had a slew of antagonists, among them Pontius Pilate and King Herod. Truth told, though, neither of them had an appetite for institutionalized Capital punishment. Pilate was a frightened middle manager in a nation not his own, Herod was a playboy, but interested in this Jesus character for the tricks he could play and the magic He could perform. DuWayne Andrews and Andrew Fry played Pilate and Herod respectively. Each brought something special to the table, with added value to the show.

If Herod and/or Pilate had the last say, though, Jesus would have survived to a ripe old age. But, it was the religious leaders of the day who did him in. How’s that for irony? As Caiaphas and Annas, Aleks Merilo and Karen Christensen played evil and stone-faced respectively. How did they do? Some in the crowd booed them during the curtain call. That’s acting, folks.

Was there anything that rang a little false in this fine production? Just one point, noticed by a few in the crowd. Haasl’s Jesus took 39 blows from the business end of a whip. His body would have marked horribly. He was hidden enough from the crowd to have come out of the flogging with bloody stripes.

All in all, though, run and do not walk to the ticketing portal for this show. It is a remarkable effort by all and sundry. If Tacoma Little Theatre’s 99th season includes this, then what will they do as an encore Year 100? God only knows, but TLT Managing Artistic Director Chris Serface has an idea.

“Do Something” Uncle Vanya opens at Falls Theater
February 5, 2019