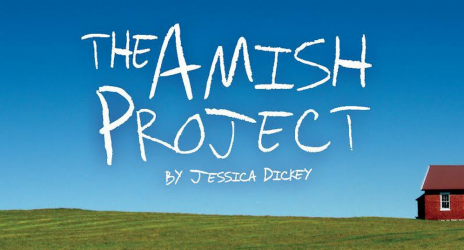 In 2006, in Nickel Mines, Pennsylvania, a man walked into a school house and shot ten young girls. The Amish Project, directed by Annie Lareau, is the one woman show that remembers it. The show is performed by Terri Weagant, who gives equal representation to seven different characters in order to tell this moving story about unthinkable violence and unimaginable forgiveness.

Weagant’s passion for the subject matter comes through in her commitment to each character. Ranging from a young girl to an old man, she portrays a killer, the killer’s wife, and a Puerto Rican grocery clerk.  Each of the characters is given the same honest treatment, and somehow Weagant finds some humor in this grave subject.  It is the humor of human flaw, and some credit must be given to writer Jessica Dickey for lines like “I love me some Lasagna” coming just when the audience becomes desperate for some relief.

The topic of school shootings is a hot one, as they continue to happen worldwide, and gun control debates never seem to leave the news. Unique to this shooting, however, is the effect it had on the Amish community, and by all accounts the forgiveness bestowed upon the family of the shooter.

Performed in front of a minimalist set of two windows, a chalkboard, and a chair, the focus is on the performer, and the story of the aftermath of this horrible event.  Assisted by Tim Crist, whose lights and sounds designed by Emily Leong and Jesse McNeece respectively, become crucial to support the actor in her solitude.

Pulling off the genre of the one-person-show is difficult to do.  With no supporting cast, and no direct dialogue, the actor is required to show everything. Terri Weagant deserves accolades for a job well done. When she needed scene partners she imagined them, and when needed, audience members worked just fine for direct address.

Lest we forget that guns are horrible, and that sick individuals are still allowed to own them; lest we forget the power of forgiveness in the face of horror: Weagant and her crew keep the debate alive, and remind the world that the issue isn’t going away.

The Amish Project can be seen at Theater Off Jackson from May 22nd-May 31st, Thursday-Saturday at 8pm.  Additional performances are scheduled at Ruby Theater in Chelan for June 3rd and 4th at 7:30pm, and Merc Playhouse in Twisp June 6th and 7th at 7pm.  Tickets for TOJ can be purchased at strangertickets.com or at the door the night of the show.  Theater Off Jackson: 409 7th Avenue South; (206) 340-1049.