‘A Hand of Talons’ A Winning Premiere 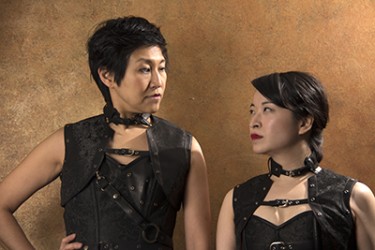 World Premiere Mash-Up of the Wild Wild West and The Godfather
Director Amy Poisson teams up with writer Maggie Lee and Pork Filled Productions (PFP) for a third time to bring us A Hand of Talons. This plays returns us to the fictional city of New Providence, the setting for their previous collaborations—the 2015 Tumbleweed Zephyr and the 2013 The Clockwork Professor.
The genre is steampunk, the drama twirls around the rivalry of siblings competing to lead the Yao Chinese crime family that runs the casino and other operations in New Providence. This is perhaps the goriest of the three plays as the struggle for recognition, power, and dominance plus a betrayal take their toll. The acting is melodramatic, to match the time period, and fully engaging.
A little schooling to get you up to speed. To start: what is steampunk? The writer K.W. Jeter wrote to the sci-fi magazine Locus in 1987:
Personally, I think Victorian fantasies are going to be the next big thing, as long as we can come up with a fitting collective term for Powers, Blaylock and myself. Something based on the appropriate technology of the era; like ‘steam-punks‘, perhaps. [emphasis added]
If you’ve seen episodes of the 1965 TV series The Wild, Wild, West or the 1999 movie starring Will Smith you have seen steampunk.
Steampunk has a unique style of dress. Costumer Joycelyn Fowler does an amazing job with black fabric. The reason for the black is that the head of the Yao crime family died three months ago and the daughters are wearing black for the traditional show of mourning. Fowler handles the other characters’ costumes with similar panache.
Everything happens in the back office of the Fortuna Mews Casino. The set by Brandon Estrella has a hidden door in a bookcase, a wall safe behind a framed picture, a wooden desk with chair, a pulley for turning on the lights, and a bar made of steamer trunks. Very evocative.
Wilhemina Yao, or Wili, (Stephanie Kim-Bryon) runs the casino for the family. Her sister Delphine (Mariko Kita) has assumed the role of Yarak, or leader, as the eldest and leads the fight for turf and market share against rival crime families.
The Yao family is in turmoil. The patriarch has been killed during inter-gang fighting. Bernie, Wili’s assistant, has lost family members and has been taken into the employ of the Yao family so she can still support herself. Delphine, the newly installed Godmother of this family dismisses Bernie’s sorrow with a reminder that it was “business.”
The Yao siblings think that the head of the clan in China has sent a spy. They learn that a new cargo ship has landed from China right when Kenzo Yao (Tim Gagne) walks into the back office. Gagne plays Kenzo with an arrogant swagger which both Wili and Delphine finds seductive.
Meanwhile, their brother Anders (Sean Schroeder), no match for his sisters, flounders about looking for something to establish himself as a contributor to the family. Wilhelmina has her power through sheer personality, Delphine now has positional power and also a strong, willful personality. Anders concocts a scheme to create an illegal weapons monopoly for the family by stealing them from the local police armory.
These roles complete the cast: Bernie (Jean Ruzemna) helps Wili keep track of the cash flow; Lawrence (Ben Burris) who is in love with Wili, but he’s meek, doesn’t party, and faints at the sight of blood—Wili’s not interested; Preston (Abhijeet Rane), a gambler down on his luck needs a loan from Wili to keep the other loan sharks at bay; And Lin (Kenna Kettrick), Delphine’s well-armed body guard.
Stephanie Kim-Bryan in the lead role essentially carries the weight for the success or failure of this production. Fortunately for all concerned she more than aces the role. This lifts everyone in the show.

Last lesson then school’s out—what is the game of talons? It’s a card game with its own deck. After the initial deal of 5 cards, players exchange one card and either player can raise the stakes. Play continues via discards and drawing more cards and the player with the best hand wins. Stakes offered during the show were a challenge to kiss someone and staying in New Providence bet against taking off for a new life. Is Wili’s fate really in the play of the cards? You’ll have to go to find out.

Thanks to the generosity of Kickstarter supporters, PFP is making several performances available at subsidize ticket prices.
A Hand of Talons, written by Maggie Lee and directed by Amy Poisson. Pork Filled Productions. Run time: 2 hours with one intermission. Theater off Jackson, 409 7th Ave. S., International District. Thurs — Sat at 8pm, Pay-What-You-Can Industry Nights  Mondays May 2 and 9 at 8 pm, and Sunday, May 15 at 2 pm. Tickets via brown paper tickets. Runs April 49 to May 21.