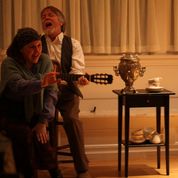 Zhenya Lavy as Marina and Sean Patrick Taylor as Telegin

All bad Chekhov productions are alike; this good production of Chekhov is good in its own unique way.

Akropolis Performance Lab deserves the highest theatre award known to mankind for their production of Uncle Vanya, by Anton Chekhov, which opened Friday night at The Garden House, a small historic mansion in Beacon Hill.

Using imagination and penetrating insight to get to the real meat of the text, director Joseph Lavy, chose a new translation by his Russian-American wife Zhenya.   In using a fresh, contemporary American translation rather than a 100 year-old British translation, this version of Uncle Vanya was not another fossil in a museum, but a vibrant play propelled by psychic movement.  The humorous aspects of existential angst, so often lost in translation, jumped out in bold relief and were reminiscent of early Woody Allen movies.

As in the other Chekhov plays, a group of interconnected relatives and friends inhabit a provincial house in the country.   Amid various highly complicated and colliding love triangles, individuals grapple with issues of frustrated hopes, unfulfilled lives, mid-life crises, unrequited love, unhappy marriages as well as the perennial pursuit of happiness vs throwing in the towel and committing suicide

It was a stroke of genius to stage Uncle Vanya in The Garden House-The Washington State Federation of Garden Clubs.  The downstairs of the house is one big room where one could hold a small wedding reception and is decorated in late 19th century style, with wainscoting, beautiful molding, attractive wallpaper, French doors leading to a staircase, and a full wall of windows, just perfect for a Russian country estate owned not by the grand aristocracy but by a non-titled high-end civil servant.  Using very simple furniture including, of course, an authentic Samovar, a spinning wheel, some old fashioned trunks, a table and chairs, rather than an elaborate set, the acting and music carried the show.  And did they carry it!!

The Music was to die for! Interspersed throughout the show were 15 songs sung in Russian accompanied by guitarist Sean Patrick Taylor, who also played Telegin. Most were folks songs and there is nothing more heart wrenching and mournful than Russian folk music.   Translations were provided in the program.

Vanya, the lead character suffers from a severe mid-life crisis involving disillusion, unrequited love and depression.  Doubling as the director, Joseph Lavy delivered a stunningly brilliant performance as Vanya, which was humorous, sad, and deeply moving.

Magaretta Campagna as Sonya, was superb as the youngest but most mature member of the household.   She has a commanding voice and presence on stage which made her plight as a plain girl of marriageable age all that more tragic.

Carter Rodriquez as Astrov, a not quite middle-aged bachelor doctor,  with fairly decadent tendencies, who destructively attaches himself to a worthless trophy wife rather than a woman who could make him happy,  was like a character right out of Dostoevsky, physically robust, but prone to debauchery.

All in all this is the best production of Chekhov I have ever seen.  The director and cast were not afraid to let the play come alive and walk out of the museum.   Book you tickets now, because the house is small

Crime and Punishment-Full of Rewards not Punishment
January 7, 2018
© 2021 Drama in the Hood. All rights reserved.
Site Design