Crime and Punishment-Full of Rewards not Punishment 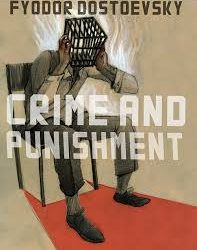 Crime and Punishment. Not Punshing but Highly Rewarding

Seattle’s highly acclaimed and inventive theatre troupe, Akropolis Performance Lab has just executed a herculean task, which for lovers of Russian literature is the Holy Grail. APL presented a magnificent stage adaptation of Crime and Punishment, the most famous of Fyodor Dostoevsky’s four long 19th Century Russian novels, at West of Lenin Theatre in Fremont.

Originally published in 1866 in 12 monthly installments in the literary journal, The Russian Messenger, Crime and Punishment was written at a time when the Russian Empire was a bubbling volcano of ideas for much needed political, social, cultural, and religious reforms, most of which were resisted by a misguided and justifiably paranoid autocratic regime.

Intellectuals interested in reform were divided into two camps; the Westernizers, and the Slavophiles. The Westernizers believed that progress in Russia should include accepting the modernizing reforms of Tsar Peter the Great of the early 18th Century, the Enlightenment as well as the reforms of the French Revolution, installed in most of Western Europe by the Napoleonic occupation.

In short they believed that the way forward for Russia was to adopt liberal governments and rationality, and reject that Russian culture was unique and followed a different path from the rest of Europe. They were also characterized by agnosticism and a lack of reverence for the Eastern Orthodox Church. Although Dostoevsky was not a Westernizer, he certainly knew their main thinkers, Belinsky and Herzen.

On the other hand, the Slavophiles, to whose camp the devout Dostoevsky belonged, believed that the history and culture of Russia was unique and different from Western Europe; which was in fact true. Western Europe had not been invaded and occupied by the Tartar hordes, Western Europe had been Christianized by Rome, not Greece, as had Russia. In addition, Russia had not participated in the Renaissance, one of the great advances and unifying historical movements of Western Europe. Slavophiles rejected the individualism of the West and believed in the collectivity of the rural village “mir”, preferring the “mystical” experiences of the Orthodox faith as a guiding principle over rational thought.

In the novel, these two polarized ideas fight for the soul of the anti-hero, Raskolnikov. Under extreme external pressures, his lack of spiritual faith allows him to succumb to the rational thought that it would be in his, and societies’, best interest to murder his pawnbroker. The rest of the novel depicts the struggle with his conscience, the authorities, and others as to whether he will accept Christian values and confess to his crime and atone for his sins. Symbolically the two camps, Westernizers and Slavophiles, battle for the soul of Holy Mother Russia.

As most of us know, Rodion Romanovitch Raskolnikov, prior to murdering the pawnbroker, was a literally penniless University drop-out, who is actually physically and probably mentally ill, living in a squalid attic, in a neighborhood full of the pernicious effects of alcoholism, poverty, and prostitution of all kinds. With nothing to do, and very little social contact, he falls prey to his own musings and thinks that there is a rational justification for murdering his pawnbroker. Just to compound all his other problems, he feels compelled to save his sister from an odious marriage of convenience undertaken, he believes, for his sake and to provide for his widowed mother.

Compounding his already vulnerable predicament, he is obsessed by the Napoleon myth. Popular in the 19th Century, this myth stated that great men should not be subjected to conventional morality because they are too “extraordinary” and their actions benefit mankind. Believing that society would be better off without the greedy pawnbroker, Raskolnikov also thinks that murdering her will prove that he is “extraordinary” and not ordinary. Being suddenly informed of his sister’s upcoming marriage triggers his previously hazy plan to murder the pawnbroker and propels him into action.

Director Joseph Lavy did a masterful job of adapting the script. In terms of structure, he succinctly pared down this 211,591 word or 499 page novel into 3 hours. Having read translations of the book four times, most recently the week before the production, in my opinion the script’s grade is summa cum laude. He left out extraneous scenes without sacrificing content, left in one of the most important pieces of narration about how people are so caught up in ideological belief that they will send armies to defend these beliefs and massacre each other, forgetting about common sense, morality or humanity. It occurs in the Epilogue, which was cleverly left out, as the Epilogue as a whole detracts from the dramatic structure. Mr. Lavy’s narration of this passage was riveting and very moving.

In this speech, Dostoevsky foreshadowed the second World War, the Third Reich’s extermination of the Jews, Stalin’s massacring his own people for “ideological purity”, and of course our own times, when ideological lines are drawn up so rigidly, in the interests of helping humanity. In fact, the strict adherence to ideology only does damage. I could not help but think of the media and Facebook, where strict adherence to rigid ideologies, without reference to humanistic values or the truth, has unleashed so much suffering and stupidity.

As a translation, Lavy’s original script was admirable. It was drawn from four different translations, and his own knowledge of Russian with some input from his co-artistic director Zhenya Lavy, a native speaker. He avoided using the stilted English found in many of the early translations, which are now over 100 years old. Instead, Levy’s script used beautiful, simple colloquial American English (and occasionally some Anglo-Saxon) so everything flowed naturally, but he did not sterilize it; he maintained the feminine endings of last names. i.e. Mrs. Raskolnikov’s name in Russian would be Raskolnikova.

As in many of APL’s productions, the music provided by Zhenya Lavy on a Hurdy Gurdy, an instrument important in Russian folk traditions, was exquisite. Interspersed throughout the production were eight Russian songs sung in the original language, which added an element of authenticity. In fact, I would say that this production was a perfect balance of delicate impeccable translation and original language.

Staging this tale was not easy because there are several scenes involving locked doors which are hugely important for the plot, as well as scenes which take place on the streets of St. Petersburg. However, the set designed by Kix, accommodated all the numerous scene changes efficiently without having to change the set, while creating an atmosphere of oppressive poverty and squalor as well as intense psychic derangement.

Another difficulty could have been how to stage the numerous dream sequences and the delirious inner monologues of Raskolnikov; these were done in a highly creative manner. His inner torments were brought to life through ingenious choreographed movement involving the whole ensemble and the eerie musical accompaniment. These scenes were a great credit to director Joseph Lavy.

The outstanding actors were Joseph Lavy who played both Marmeladov, a chronic inebriate and Svidrigailov, the inverse of Raskolnikov, a man like Raskolnikov capable of both extreme generosity and extreme evil but who ultimately chooses suicide rather than punishment and eventual redemption.

As Svidrigailov, Lavy captured all the smarminess of a well-bred, well-spoken, fairly charming, manipulative debauchee, who lives only for his own sensual pleasure and will do any amount of conniving, blackmail and evil to commit heinous acts of sexual depravity. Svidrigailov’s costume, designed by Fantasia Rose, is perfection itself. Clad in a well-tailored white summer suit, Svidrigailov appeared to be exactly what he was, a wolf in sheep’s clothing.

Another outstanding actor was Matt Sherrill as Razumikhim, Raskolnikov’s friend who is in many ways the opposite of Raskolnikov; he is cheerful in adversity, industrious, practical, and astute. Although Matt Sherrill did not match Dostoevsky’s physical description, as Razumikhin was physically immense, yet when Sherrill walked on stage Razumikhin’s personality filled it, and he provided a lot of comic relief amidst the fascinating but rather depressing subject matter.

Jennifer Crooks as Porfiry Petrovich, the lead investigator of Raskolnikov’s crime, was also a pleasure to watch as she adroitly played the cat and mouse game interrogating him. With humor, she drew the audience into the psychological scoring match, and kept us amused. As Sonia, the saint-like prostitute, who inspires Raskolnikov to repent, Sara Kaus exuded the essential goodness and spiritual wisdom befitting the character.

In my opinion, I thought the performance of Tyler J. Plumsky as Raskolnikov was too one dimensional and lacked the haughty pride described in the book. The name Raskolnikov itself means “schism” referring to the Old Believer religious sect or the people, who did not accept the early 18th Century church reforms of Peter the Great. It also refers to a schism within Raskolnikov himself; a person who swings between incredible kindness, a desire for intimacy on the one hand and incredible cruelty and a desire for isolation on the other. Mr. Plumsky did not have particularly good timing and seemed to always play the depressive whereas; there were many opportunities to play Raskolnikov as sarcastic and sardonic.

However, taken as a whole, the production was a colossal success and I, for one, hope that APL adapts all the other works of Dostoevsky, as well as Tolstoy and Turgenev. It is a task as big and as complicated as the Russian Empire but APL has more than demonstrated that they are worthy of it.

Get your tickets now, it was sold out on opening night.