Hansel and Gretl, in the Park 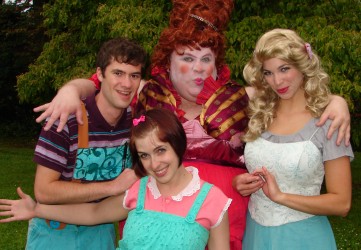 Hansel and Gretl Deliver a Hoot for the Whole Family

The creative team of Capitol Hill’s Theatre Schmeater delivers a wacky and totally entertaining Hansel and Gretl for the outdoor amphitheater in Seattle’s beloved Volunteer Park.  Performing free every weekend through August 5, everyone in your family, whatever your family looks like, will double over in laughter watching these troublesome twins in a story that looks nothing like what the Brothers Grimm had in mind.  In this case, that re-imagining is a win-win, for audiences and performers alike.

Director Julia Griffin takes on the wacky text of Sally Gander’s play with a sure hand and a keen eye for physical humor. The Grimm Brothers would roll over in their graves if they knew that the team of Griffin/Gander were determined to take all the horror and violence out of Hansel and Gretl’s hands, but that’s exactly what they’ve done.

With a company of talented and shameless actors, and a style of play so broad that park-strollers were magnetically drawn to the stage from all over the park, Theater Schmeater’s Hansel and Gretl is a rollicking good time.  There are characters in this story invented for this panto; a European-style of play with stock characters, Punch-n-Judy-style physical battles, direct connections with the audience, and comedy that includes slapstick, clever choreography, great stage clowning, and pure balderdash.  Jay Irwin’s larger-than-life drag characterization of H and G’s mommy is rendered big enough to be the Grand Marshall of a fairy-tale parade, and the keystone-cop antics of characters of Short and her partner Sweet, ably played by actors Kacey Shiflet and Lantz Wagner, were worthy of a nod towards Buster Keaton’s great clowning. Gina Maria Russell, in the role of H and G’s sister (who knew?) somehow managed to make the empty-headedness of her character Freda one of the smarter people around, and her voice was delightful in its effortless projection in both singing and speech.

A gentle recommendation to the players would be that they invite their audience to sit closer to the stage and perhaps that they experiment a bit with the acoustics of the amphitheater.  They are working way too hard for volume, and at times they are literally screaming.  It’s not necessary, as the natural acoustics of the space can work in their favor if they get a little more practice with its features.  Also, the staging which brings the actors out to and through the audience works well to keep us all engaged.  We can and want to hear you!

The whole audience, which doubled in size during the show, loved the performance, cooperating willingly in providing the necessary boos, hisses and shouted instructions to characters who were unaware of approaching dangers or hilarity.  Get there, you will see fabulous underwear.