Irreconcilable History and Fiction in Mr. Dickens and His Carol

Seattle Rep brings Samantha Silva’s acclaimed Mr. Dickens and His Carol to the stage for this Holiday season. The performance is expressive, dynamic and character-driven, with a cast of actors and stage choices that carry the story with ease. First published as a novel in 2017, Silva’s narrative explores the creation of Charles Dickens’ ever-famous A Christmas Carol while, in a Scrooge-like fashion, also going into the past, present, and possible future of the author himself.

However, what is not immediately clear is that this is a fictional narrative that, in this case, leans more into fiction than accurate history. While this isn’t necessarily a bad thing, it’s a shame that Charles Dickens gets reduced to a pompous, self-centered character, quite the opposite of what his literature reflects of him. In fact, while Silva’s Dickens hated the idea of writing a Christmas story and only did so to get out of a financial hole, real-life Dickens was motivated by something far bigger than his own finances. 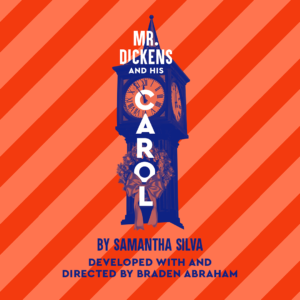 A Christmas Carol was actually a response to the exploitation of child workers in Victorian Britain, something that the author experienced himself as he was forced to work as a child after his father was sent to debtor’s jail. While it is true that his Christmas novel was urged by his financial situation, his intention was a far kinder one than the one reflected by Silva. It seems disrespectful that a depiction of Charles Dickens – a lifelong advocate against child labor and racial and economic injustices – would chase away a child beggar on the streets, as he does in Mr. Dickens and His Carol. It might have been a good idea to fully embrace the fictional aspects of this account and change the main character’s name to something other than Charles Dickens that could still be associated with the author but that would make it immediately clear that this isn’t a faithful representation of his persona.

Having said that, director Braden Abraham’s play is a truly enjoyable performance – though perhaps too long at times –, with a heartfelt emotional journey, excellent staging and visual and sound effects, and a noteworthy delivery by the cast. Adam Standley, who plays Charles Dickens, is emotive and expresses his most negative and complex emotions flawlessly. He’s understandably worried about his family and their financial situation, he’s angry and dejected at people’s rejection of him as an accomplished author, and he’s still hurt by a father who wasn’t there for him. Even then, he remains an unlikable character through most of the story, self-centered and pompous and doing business while his wife screams through childbirth. It made an already interesting character more complex and fun to witness. In a remarkable scene, Standley plays an angry Dickens, wonderfully creepy and almost unhinged, as he blows off all family and friends. Outstanding debut by Standley, who takes over a stage that threatened to be too big for anyone. 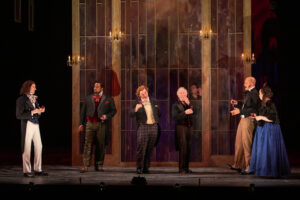 The staging, lighting and audio choices were purposeful and helped in adding meaning to each scene. The stage could be full of life and movement, or it could be dark and unsettling, it could be a toy shop with kids running around or a cemetery with a distraught Dickens chasing away a beggar boy. Whatever the scene was, stage changes were smooth, and the space was taken advantage of to its fullest extent. The wings of the stage were open and visible to the audience, and it was a fun experience to get an inside view into how certain sensory details were created – such as the scribbling noises of Dickens writing a novel, a piano for live music, and percussion – and how the actors and props would line up waiting for their scenes. If anything, the extended stage may have made it harder for actors to have a big enough presence in the space, although the cast seemed to be able to get past this hurdle.

The end of the story tries to transmit the same message as A Christmas Carol: that being kind and loving to others is the spirit of Christmas. As Dickens tells his children, “Christmas is about feelings, not things”. However, although Dickens tries to embrace this spirit, it seems his happy ending hinges on his financial stability returning for him to become a decent being again and be respected by both colleagues and family members. It’s almost as though the real message of the story is that money solved all his problems, even though that’s clearly not Abraham’s or Silva’s intention. The idea might have been the opposite, Dickens fixed his ways and then everything else fell into place, yet this isn’t immediately clear given that a majority of the play focuses on him getting money to fix his marriage, relationships and popularity. The fact that the ending doesn’t explicitly amend that sentiment may make it seem that it was, indeed, money that fixed everything. This would definitely be something worth looking into in future performances of the play.

Get your tickets here: https://www.seattlerep.org/plays/202223-season/mr-dickens-and-his-carol/“https://www.dramainthehood.net/wp-content/uploads/2020/06/2-Seattle-Rep.png”>