Ghost Writer at Woodinville Rep, A Production of Subtleties

The Woodinville Repertory Theatre is (finally, gladly) back in person after two years, with a production of Michael Hollinger’s Ghost Writer. Inspired by real-life Theodora Bosanquet, a secretary and typist who was said to be able to hear her employer after his death, Hollinger wrote this play back in 2010 and won the Barrymore Award in 2011.

A three-person play – four, if you count the typewriter –, Ghost Writer centers around Myra Babbage’s (Mary Leedy) relationship with acclaimed writer Franklin Woolsey (Curt Simmons), first as his typist and later as his romantic interest. The thing is, Mr. Woolsey is dead, and Myra is narrating their story to an offstage character – presumably an investigator – while trying to explain her belief that her former employer is dictating his last novel from beyond the grave. This gives rise to a lot of time jumps, parallels, and a character with a lot of internalized frustration. Mrs. Vivien Woolsey (Melanie Workhoven), the deceased’s widow, is a driving force and key to the increasing tension throughout the play, with her nagging nature and inopportune interruptions. 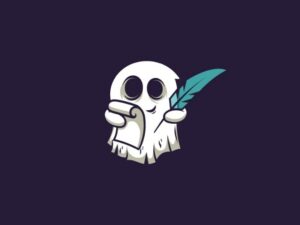 The play is intentionally set in 1919, after WWI, when the number of deaths inevitably led to a rising belief in mysticism and spiritualism. Then, it would be conceivable that someone was receiving words from a ghost. At the same time, the play takes place during the Women’s Rights Movement era, in a world that was certainly more liberal to women but still significantly restrictive and resistant to change. Myra’s character – as adamant and daring as she is – is a good representative of women at the time. In fact, the whole set is an accurate depiction of the 1900s, with an authentic gramophone, rotary dial phone and typing machine.

As attentive as this production is to all the intricacies and small details, it asks for the same from its audience. After all, it’s a monologue, a literary device known for being hard to follow. So much so that it’s hard to understand what is going on for the first third or half of the play. While complex and slowly unfolding narratives can be a good way to keep audiences engaged, it seems to be a confusing element that detracts from the enjoyment of this production. It would be a good idea to attend this play while already knowing what it will be about beforehand.

However, the actors, the realistic set and the sound production do a very good job of keeping the audience captivated in otherwise dull moments. Mary Leedy, meticulous in her movements, keeps herself expressive and can master ironic humor, making jabs and alleviating the mood with ease. Though she could benefit from a livelier dialogue and a less monotone voice, she’s able to carry the plot and keep it moving forward through both slow and drama-loaded scenes. Her counterpart, Curt Simmons, has a commanding voice and good poise, as he lets himself get lost in the ideations of his character. He’s able to evoke a true writer in ‘the zone’, which in the best parts had me holding my breath.

Albeit she had the least scenes, Melanie Workhoven’s presence was the most stimulating, her voice filled with a cadence that made it easy to pay attention to her. She controlled the scene, and whenever her character made an appearance in a foul mood, I felt nervous myself, foolishly trying to not be identified as a target of her mood.

At the same time, and as often happens in a monologue, Ghost Writer relies on sounds to set the tone and elevate emotions. This is perhaps one of the best elements of this production; every gasp is precise, every ring of the telephone and every knock on the door sudden and striking. The typewriter, an authentic Oliver typing machine from the early 1900s, is loud and capable of transporting the audience to a different epoch almost by itself – except on the few regrettable occasions when its clicking drowns out the actors’ voices.

Nonetheless, director Cynthia White’s production is an enjoyable rendition of Ghost Writer, suitable for those obsessed with the writing process, enraptured by monologues, and with sharp attention to detail. Although there is room for improvement, it is certainly a good comeback and a good “first draft” – as board chair and producer, Charley Blaine refers to it. Overall, an emotive, surprising and complex narrative that mixes truth with fiction and questions the value of creating stories, and “…I suppose that’s all there is.”