BELLINGHAM THEATRE GUILD DAZZLES WITH INTO THE WOODS

Don’t let Bellingham’s robust outdoor scene overshadow its vibrant performing arts community. While the lush green coastal forests possess their own allure, a very different type of woods proved to be the main attraction this past weekend.

Into the Woods, directed by Teri Grimes, continued for a second weekend at The Bellingham Theatre Guild. The musical, originally by James Lapine and Stephen Sondheim, was performed in front of a packed crowd on Saturday evening.

Loosely based around several Brothers Grimm fairy tales, Into the Woods follows a string of familiar storybook characters in slightly unfamiliar situations. When a Baker and his Wife fail to start a family due to a witch’s curse, they set off to collect an array of odd items to undo the spell. Their journey brings them into the woods and in contact with other characters, including Cinderella, Little Red Riding Hood, and Jack— all looking to fulfill their own wishes.

As worlds collide and strange things start to happen, the characters realize they must band together if they wish to survive a threat bigger than any of them ever imagined. Of course, all of this action is guided with song and dance that urges viewers to venture into the woods, a dark and mystical place. 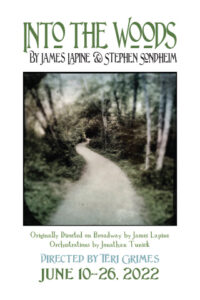 Under the direction of Teri Grimes, this production of Into the Woods flourishes. But a very talented cast and crew doesn’t hurt either.

The woods come alive thanks to a projected cartoon forest backdrop, rocky outcrop, and towering tree. The set design by David Cohn is bright but not overly distracting— everything a good woods should be. The lighting design by Kyle Johnson helps further the illusion by mimicking eerie moonlight creeping through the forest canopy.

Prancing amongst the woods are Brendan Francis and Candice Lundy who perform fantastically as the Baker and his Wife. Their onstage chemistry was compelling and fun, making the twists and turns of the show even more impactful.

The couple’s desire for a child was marred only by the youthful sassiness of Little Red Riding Hood, played by Carmen Souza in her Theatre Guild debut. Souza’s comedic flat affect contrasted the personalities of the other characters well and added to the humor of the show.

While the whole cast performed phenomenally well, Benjamin Usher stole the show. Usher’s devious charisma served him greatly as both the sinister Wolf and aloof Prince Charming (Cinderella’s Prince). Wearing an unwavering smirk and silly royal garb, Usher’s performance as Prince Charming was especially fun to watch, and his vocal chops only heightened his performance. In fact, Usher and Riley M.Z. Stowell’s (Rapunzel’s Prince) duet of “Agony Reprise” amassed some of the loudest applause of the night. Witnessing their bromance is enough of a reason to try and see the show.

The Theatre Guild’s production of Into the Woods is an exciting show that warns the audience that wishes aren’t all they’re made out to be.

Although tickets for the closing weekend appear sold out, Into the Woods proves you shouldn’t sleep on the Bellingham Theatre Guild and their upcoming season of shows.

Read other reviews by Aryonna Willoughby