What good is sitting alone in your room. Come to Reboot’s adaptation of Cabaret.

Yes indeed, Reboot’s production of Cabaret delivered everything Sally Bowles’ song promised music: laughter, escape but also shrewd political commentary, which is as relevant today, as it was in the last years of the Weimar Republic. 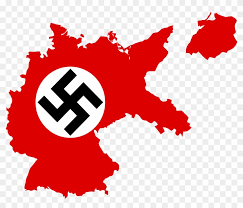 In 1929, the apprentice English writer Christopher Isherwood moved to Berlin, along with his chum the poet W.H. Auden, partly because Berlin had a flourishing LGBT scene, making it a famous mecca for gay refugees from all over the world. Also, as George Orwell put it “the left bank” had moved from Paris to Berlin, in the late ’20’s. As a result of this move, Isherwood was able to chronicle the social effects of the destruction of the Weimar Republic, by the Nazis, in several semi-autobiographical novels and short stories Good-bye to Berlin, 1939 Mr. Norris Changes Trains 1935 and Sally Bowles,1937

Over the years, these stories have been adapted, often quite loosely, adding and deleting characters; first as a stage play I am a Camera in 1951, and Cabaret a stage musical 1966, and of course the multi-award winning movie Cabaret with Liza Minnelli, Joel Grey and Michael York, in 1972

The basic story in I am a Camera, Cabaret the musical and Cabaret the film, is that a shy writer from England moves to Berlin where he meets the exuberant, sexually audacious Sally Bowles, a night club singer, who introduces him to Berlin night life. In 1951, it was impossible to say that the writer was gay, so they were “friends.”

In the original story, Sally is a well born English 19 year old slumming it. In the film, she is an American wannabe actress but making a living singing in disreputable dive night-clubs. (N.B. About Liza Minnelli vs the original Sally Bowles, Christopher Ishwerwood commented “It is difficult to make a movie about bad singing and dancing, if the original Sally Bowels’ cabaret had been as good as Liza Minnelli’s it would have toured all of Europe and American as well.”)

In Reboot’s version the writer is American, Cliff Bradshaw, Sally is English and they are a couple. The conflict between what is happening politically outside the Cabaret with the Nazi’s ascent to power and the hedonistic oblivion to the outside world inside the Cabaret, is played out in their relationship.

The strength of this production was the superb performance by the emcee June Apollo Johns, who did not try to imitate Joel Grey, but made the role their own. Along with exuding decadence and sauciness, their connection with the audience was as strong as their comic timing. Their German and French accents were extremely good but sometimes the diction was not clear enough. As far as the musical numbers go, stand outs were “If you Could See her Through my Eyes” and “Two Ladies” 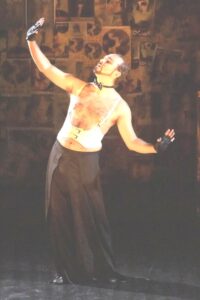 Choreography by Elizabeth Posluns was outstanding as were the team of dancers who were of all shapes and sizes as well as intriguing costumes by House of Daggers, Fantasia Rose and Katrina Hess. 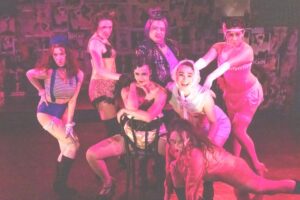 Alexsei Cifrese, as Fräulein Kost, the resident prostitute in Cliff’s boarding house, put in an audacious performance all dolled up in vampish make up dressed and undressed in a flaming red dressing gown.

Unfortunately Heather Refvem put in a weak performance as Sally; in general she overacted, her supposed English accent traveled around from the West End to the East End of London (Cockney) to New York, and some of her singing was screechy.

Of particular note was the ending, which was completely unique to this production, and was a credit to director Jasmine Josuha, as was the whole production. Choosing to use Theater off Jackson was inspired because the small intimate space was exactly the ambiance of the sort of clubs where the singer, Jean Ross, the inspiration for the fictional character Sally Bowles, actually sang.

I recommend this show, it provided a lot of laughter, and its social commentary is every bit as relevant in these post Jan. 6, 2021 times as it was in pre January 30, 1933. The audience participation was uplifting.