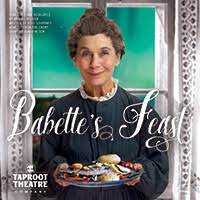 Honest to goodness live theater is finally back at the Taproot Theatre!  The Seattle premiere of Babette’s Feast marks the long awaited return to work for Greenwood’s favorite acting troupe.

To be sure we are now involved in the “new normal” here. Karen Lund has assumed the role of Artistic Director replacing Scott Nolte. Nolte is still very much involved in Taproot affairs and has directed this version of Babette’s Feast. The evening began with a tuneful quartet of masked-up Dickens Carolers singing Christmas tunes. There are fewer seats now in the theater allowing for some form of social distancing. All audience members are asked to show their vaccine cards and wear masks throughout the evening. Despite these restrictions, there was a palpable excitement filling the theater on opening night.

The action of the play all takes place on the isolated shores of 19th century Norway, in the tiny town of Berlevaag. Here a hardy and pious group of Protestants eke out their lives under cold grey skies. The focus is on the town’s pastor (Nolan Palmer) and his two daughters, Martine (Jenny Vaughn Hall) and her older sister Philippe (April Poland.) Both actresses do outstanding work enacting the conflicted states of two very spirited but somewhat subjugated bright women. In early scenes, enthusiastic suitors court both daughters; Martine exchanges heated glances with a gallant Swedish cavalry officer, while Philippa shares operatic duets and a brief kiss with Achille Papin, (the talented Mathew Posner in very fine voice) a star baritone from Paris. The two sets of relationships are shattered on the icy coastline rocks when the daughters realize that their father would not accept such warm-blooded romance under his roof.

The play’s turning point occurs when Babette (Pam Nolte) a Parisian cook, appears at the family’s door bearing a letter from Papin. She is a refugee from counter revolutionary bloodshed in Paris and has lost a husband and son. Though the family cannot afford to pay her, they take her in as a housekeeper and cook. Babette has consented to work for free. She slowly learns how to tinker with the Spartan cuisine promoted in the village. She knows there is more to life than the bland fish-based soup served night after night. Her romantic appreciation of the wonders of our natural world provides the dynamic force that will affect the entire village.

Through a remarkable stroke of good luck, Babette has acquired ten thousand francs. She decides to put together a celebratory meal that will commemorate what would be the pastor’s 100th birthday. Babette plans to go all out and prepare a luscious repast. The town is dubious and consents to eat the food but vows not to comment about its qualities.

The feast serves as the climax of the evening. Most of the play’s previous scenes were rather short and focused, but the dinner scene spends a luxurious amount of time upon the delights of the fantastic food and wine served to the villagers. The transformative joys of the meal rekindle the spirits of the two daughters. Indeed the entire village experiences an almost mystical rebirth and reevaluates the importance of celebrating the here and now. Eventually, we learn of the immense sacrifice Babette made in producing the feast, but she insists she is an artist and artists must immerse themselves in the bounteous joys and grace that this world provides us, no matter the cost. A very apt theme for the Taproot’s return to live theater.

The road to Babette’s Feast becoming a stage play is quite circuitous. The tale first appeared as a short story written by Karen Blixen (Isaiah Dinesen) in 1950. It was adapted into a Danish film, “Babette’s Gaestebud” in 1987 and went on to win an Oscar for best foreign language film. It finally ended up on stage when Rose Coutney’s adaptation appeared off Broadway in 2018.   It is this version that now graces the Taproot’s stage, greatly helping to brighten the darkest days of the year.

Babette’s Feast runs through December 30 at the Taproot Theatre at 212 N. 85th Street in the heart of Greenwood. Stream at home options are coming soon. For more information, go to or call 206-781-9707.