What We Were-and what they were not

Blake Hackler’s play What We Were, seems to refute Tolstoy’s famous quote “Happy families are all alike; every unhappy family is unhappy in its own way,” in that the play exposes, in almost textbook fashion, the standard pattern of family system dynamics in dysfunctional abusive families. Undoubtedly, the play is not for the faint-hearted, as it is a very clear coherent statement about the different reactions towards incest and how it both divides and unites siblings.

The plot centers on how two sisters, left behind in a small East Texas town, react to the disappearance of the youngest sister, who has been missing for 17 years. The oldest sister Carlin, played by Tracy Leigh, would just as soon bury the whole thing, as it threatens her attempt to conceal her past by clinging to normalcy: a marriage, a family, a job, and her standing in the community. On the other hand, the middle sister, Nell, superbly played by one of Seattle’s best actors, Lisa Viertel, has been devastated for years by the guilt of not protecting her younger sister, when her turn came. Nell goes to great lengths to locate her sister and deal with the whole mess. Tessa, the youngest sister’s missing years are displayed in non-chronological order, jumping around from place to place, and epoch to epoch

The strength of the production was in the strong performance by Lisa Viertel. As Nell, Viertel had the best role, because as the middle sister she played the pivotal role, caught in the middle trying to placate both opposing sides. As a result she was the most conflicted. Also vocally Viertel could project and enunciate so that the audience could hear her lines. Emotionally, she connected with the audience and her character. There was never a dull moment while she was on stage and she handled her long monologue like the pro she is. 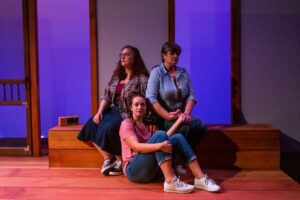 Unfortunately, the actress who played Tessa, Lauren Freman, the sister who fled, lacked the emotional depth necessary to engage the audience in her long monologues; vocally she could not project and her diction was blurred so that 10% of her lines were inaudible.

Particularly impressive were the technical aspects, led by technical director Justin Duffiance. The scenic design by Robin Macartney along with the projection designs by Jared Norman were very attractive and enabled quick “set” and time changes, the sound design by Nathan Schilz as well as the Lighting by Chih-Hung Shao added an immense amount of atmospheric emotion to the piece.

The weakness was actually in the structure of the play, there was no comic relief, nor any suspense since too much was given away in the first scene. Although psychologically accurate, for someone of my generation, who saw Chinatown in my early 20’s, have watched Oprah, and read the Ask Amy column assiduously every day, there was not much new information about abusive dysfunctional families. Since the audience did not wonder what had actually happened to the sisters, nor why the youngest sister had fled, the play just seemed like a very long dénouement. Also without costume, hair or make-up changes, the chronology of events was difficult to work out.

Having said that, Pony World has taken on a difficult topic. For the right person, What We Were is a highly educational, cathartic and accurate portray of the fall out from sexual abuse within families. (It has relevance for more than families since, as we all know, institutions and work environments can function like families) I was particularly taken with the set and even found the socially distanced arrangement of the seats rather striking, when I first walked in. It looked positively artistic. In an effort to save paper, the program was posted on a screen for all to see before the show, so we were occupied while waiting for the show to open.

COVID SAFETY
Proof of vaccination at the door. Seats are socially distanced and masks are required