They say that comedy is trauma plus time. The comedy show, Crazy Woke Asians, which opened at the Market Theatre, but is playing this weekend only, at Theatre off Jackson, illustrated this concept to a T. CWA, a comedy troupe from Los Angeles, poked fun at the conflicts arising from being a) a subculture perceived as the “other” confronting the culture perceived as the “norm” b) the conflicts within that culture as their cultural values are eroded and c) the age old struggling immigrant parents’ expectation of their children vs. the children’s longing for individual freedom.

By that description, the evening may have sounded like Sociology 101, but it was not, it was hilarious, but profound containing well-delivered jokes by polished comedians which kept the audience laughing for hours.

A common theme among the seven comics was the “Asian mother,” These comics seemed to be carrying on the tradition of Jewish comedians of the 1950’s and 1960’s. Imitating their mothers was always good for a laugh especially rendered by Cindy Su of Bellevue, Hank Chen of New York and L.A. and the show’s producer Kiki Yeung.

Jiaoying Summers, who arrived in Kentucky, yes Kentucky, directly from China at age 18, had some excellent comebacks for Kentucky stereotypes of Chinese culture. 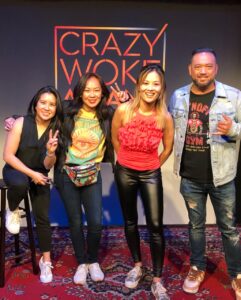 Another great theme was mocking the stereotypes white people have about Asians and what they eat; the sacrilegious condiment white people put on rice as well as references to canines in cooking, and other non PC jokes.

All in all, it was a great show, full of irreverent laughter.