Wooden O’s The Comedy of Errors

With this year’s Shakespeare in the Park productions in full swing, there is a sense of playfulness and dynamism throughout the local theatre community. Perhaps the production most representative of this influx of enthusiasm is Wooden O’s The Comedy of Errors.

Directed by George Mount, The Comedy of Errors takes a unique approach in its interpretation of the Shakespearean comedy by leaning into the more rambunctious, silly aspects of the show. Rather than having elaborate costumes props or set pieces to fit a certain theme, Mount instead takes a more bare-bones approach. The focus is fully on the actors, their chemistry, and their natural comedic instincts.

By reworking the show in such a way there are several benefits. Firstly, the comedic timing is uninterrupted between scene changes. As there is no formal backstage, actors can leap right into their characters without a moment’s hesitation.

Secondly, taking a more laid-back approach gives the show a much more improvisational tone. Throughout the performance, it was clear that this cast and director had a lot of fun adding sound effects and vaudevillian staging into the script to heighten the comedic energy throughout. 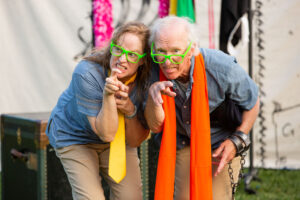 I applaud the actors in their ability to keep up with the pacing and physical hurdles the blocking demanded. Standouts were Hamilton Wright and MJ Daly. Both were impressive in their ability to be laugh-out-loud funny while staying true to their characters’ mannerisms.

There are a few moments, however, where the lack of costuming and direction can be a bit overwhelming. Due to the limited cast and wardrobe, understanding which characters were onstage at a time became a bit cumbersome. This is especially unfavorable in a play that focuses on mistaken identity, leaving the audience a bit lost in some scenes.

Further, while I absolutely commend the actors and their performances, the direction of having each character be on similar levels of wacky and loud drew away from the more grounded aspects of the story. The downside to putting such energy and exuberance into these performances is that there is no comedic contrast for this standard. There are fewer scenes and situations where the characters act normally, so it is harder to laugh at them when they are frustrated or making exaggerated speeches/movements.

Despite this criticism, The Comedy of Errors is not trying to be anything especially nuanced, or grand. It aims to be a silly, lighthearted show meant to lift spirits after a difficult year for theatergoers throughout the Seattle area. I would highly recommend you support this wonderful company and take the time to go out and appreciate the hard work they put into this production.