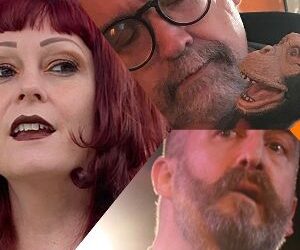 Scott Augustson, read the second installment of his Lives of the Animal Saint series: St. Inky of the Poor Martyred Monkey, which was actually a well-written coherent short story, which he read. It is a combination of John Steinbeck and Upton Sinclair, told as a fairy tale involving a monkey who migrates from the Jungle to the city, and encounters Dickensian oppression.

Kelleen Conway Blanchard, whose delivery was excellent, full of drama and humor, read a rather incoherent story involving a lot of interesting therianthropes, or half human-half animal hybrids lurking around Seattle creating havoc, but its lack of a central theme made it rambling and overly long. Still it was fairly enjoyable.

The real star of the evening was Bret Fetzer, a real showman of the Southern Storytelling tradition. Dressed up in a downhome country style, playing a character who might tell such stories, he launched into The Downsing Rod, a variation of the Frog-Prince archetype with a rather twisted and unexpected ending. Then the Grandmother Underground tells the tale of an orphan girls who proves that dreams really do come true. With the help of the most unlikely of rescuers.

Once again, 18th and Union has produced off-beat excellence, I encourage everybody to get either in-person tickets or stream tickets, Storytelling is a great tradition and one doesn’t see it often.

Tickets available at https://18thandunion.org/animal-saints-animal-sinners
CHOOSE FROM TWO TYPES OF TICKETS:
Live Stream
Watch the show from the comfort of your home or wherever you want to be.

In Person
We’re offering a limited number of tickets to join us in the theatre. It’s early days for live audiences, and we’re taking it slow.

All in-person audience members must be fully vaccinated; including the two-week waiting period after your final shot. We won’t ask for proof; however, when you arrive at the theatre, we will ask you to re-confirm that all members of your group have been vaccinated.
Since all staff and audience members will be vaccinated, face coverings are optional.
There will be absolutely no late seating.
18th & Union has both air conditioning and a ventilation system which facilitates full air transfer every five minutes.
If you purchase a ticket to watch the show in person and change your mind, no matter the reason, we’ll exchange your ticket so you can watch on the live stream.