Alice in Wonderland-Lewis Carrol in the Park 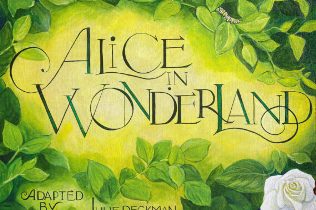 Celebrate the End of Quarantine in Volunteer Park

It seems this summer, Volunteer Park has been attracting some truly talented outdoor shows. Following hard upon Greenstage’s excellent production of Shakespeare’s Midsummer Night’s Dream, Theater22 opened a truly exquisite adaptation of Lewis Carrol’sAlice in Wonderland, complete with music, a bit of camp, as well as witty references to the pandemic, Seattle and indeed Gracie Slick. 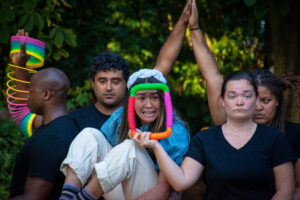 I cannot praise this production enough, especially since it was planned at the last minute, as soon as the pandemic restrictions lifted, but looked every bit as polished as if it had taken a year to produce. Given the technical challenges of producing a live outdoor stage version of a show with complicated special effects, lots of quick scene changes as well as the double/triple casting of a small cast, the directors, Julie Beckman and Jasmine Lomax pulled off a Herculean task, relying on creativity and simplicity rather than technical hard-ware.

Director Julie Beckman adapted the superb script, which stayed true to the structure and essence of the original story, but modernized it, with some local topical references and some hilariously funny musical numbers. The script appealed to all ages, from children, to baby boomers and everybody in between, with plenty of audience participation, even from a small dog! I predict that Theater22’s Alicewill become not only a staple at Seattle’s Outdoor Theater Festival, but will become a staple at every outdoor theater festival nationally, if not internationally. It is that enjoyable!

For an evening performance, Theater22 avoided one of the biggest problems of staging an outdoor show in Volunteer Park. They staged it so that the audience faced East, so the setting sun was NOT in their eyes. It was in perhaps the best place in the park, on a lawn NE of the Seattle Asian Art Museum. A row of trees and bushes created a perfect backdrop for the stage, and behind the audience was another row of trees, so the audience was shielded from the intense heat. There was an added benefit in that the setting sun cast luminous light on the stage.

In addition to the excellent directing, setting and music, Berkman and Lomax assembled a highly capable cast, lead by Alanah Pascual, who played Alice as an engaging, curious but spunky child, with an immediate connection to the audience. Other standouts were Antonio Mitchell, a singer/actor who played a jazz singing Dormouse and brought the house down as the flamboyant Duchess. Christian Zumbabo, as the Caterpiller, supplied a surprise, which will please all the baby-boomers but was, in fact, an easily anticipated non-surprise. As the Mock Turtle, Nicole Suyama performed as a diva. 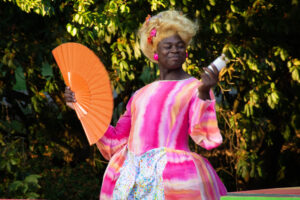 Rob Witmer’s sound designs were spot-on and very complicated, as were the set and Props by Joshua Legate. Costumes by K.D. Schill really set the tone for the show. I particularly liked the costume for Alice; she was dressed in a Peter Pan collared girlish baby-blue blouse with white overalls; so she hinted at the original Alice but was modern at the same time, much like the production.

I heartily recommend this production. One advantage of the drought is that it is unlikely the show will be rained out, and by 7 pm, the intense heat has abated, so the temperature was perfect. Get there early as it is likely to be crowded.

Theater22 deserves an award for creating such a fantastic show at such short notice. It was rather like a ritual gathering together to celebrate the ending of our long isolation in quarantine, a celebration of community. 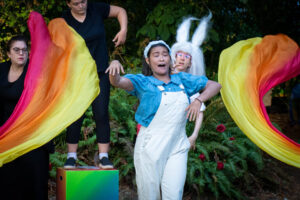