The comic strip, “Little Orphan Annie,” started its long and successful run in 1924. A staple for over four decades, the strip portrayed the adventures of Annie, her dog, “Sandy,” and the wealthy household who takes her in. Mostly light reading, the strip occasionally used its reach across the country to lampoon Communism, and President Roosevelt’s New Deal. The musical theater version of the story sets the scene as 1933, with the country in the throes of the Depression.

Of course, the country is very different than the one in 1933. Back then, there was a vast gulf between the rich and the poor…Sooo, perhaps this is a good time for a revival of the show. Paradise Theatre, late of Gig Harbor, for now in Port Orchard, opened the show Nov. 18, to some of its largest crowds in recent memory.

First, a disclaimer. Two different casts perform this show, designated “Red” and “Blue.” Most of the adults are in both shows, but many of the children were placed in one or the other by Director Jeff Richards. Drama in the Hood saw the Red cast, with Lily Nichols in the titular role. Zoe Cook takes the reins of the lead role for the Blue cast, and (according to choreographer Vicki Richards,) brings something different to the show. Obviously, one could do what a family seated in Row Three Saturday afternoon are planning to do, which is come a second time to catch both colors in action.

Miss Nichols is a delightful young performer, who really hit her stride and found her inner Annie With No Last Name about thirty minutes into the action. A stronger actor than singer, Lily’s stage prowess shined brightest in her interactions with Jeffrey Bassett’s Daddy Warbucks. You could feel the throats of the audience catch a little when Miss Nichols and Mr. Bassett danced together, and that was when this show’s moment of stage magic took place. Drama in the Hood fully congratulates these two performers for that, and thanks them for the honor of witnessing it.

For his part, Mr. Bassett is the show’s best singer, delighting the crowd with “You Won’t Be an Orphan For Long,” in the first act and again with “Something Was Missing” in Act Two. His familiarity with the role stems from playing it three times in the last ten years, and all at Paradise. That kind of experience allows the role to mellow and ripen into a performance this strong.

Kim Myers’ Miss Hannigan is the most intricate character in the show. Overworked and underpaid, Orphanage supervisor Miss Hannigan allows her frustrations with life to play out in casual child abuse and closet alcoholism. Through it all, and with the guidance of Ms. Myers considerable stage talent, the audience occasionally sees through to the tortured soul underneath. Obviously, few people in 2019 condone physical punishment of children, but there is nuance to this role, and Kim Myers found it. Her performance was superb, and Drama in the Hood understands that she was, (in sports parlance), playing with pain all weekend. Be better, Ms. Myers, because this show needs your gift.

Diane Daniels’ Grace Ferrell she is crisp and efficient. The secretary who keeps a powerful man’s affairs in order is a staple of stage and screen, and Ms. St. Regis is a great example of the form. Ms. Gardner’s performance in the role is excellent.

Paradise veteran performer Eli Ghorley plays the nefarious “Rooster”. An ever-bumbling con artist, Rooster never fools anyone in the audience into believing his efforts to collect Annie, and the $50,000 reward for proof of his parentage, would be successful. Mr. Ghorley has a fantastic way with comedy and it was in this show that Drama in the Hood figured out what famous comedian he resembles. While being a polar opposite in body type, watch Eli Ghorley perform comedy and you will see, as we do…W.C. Fields! As in almost every show he appears, Mr. Ghorley is worth the price of admission. He can dance too! 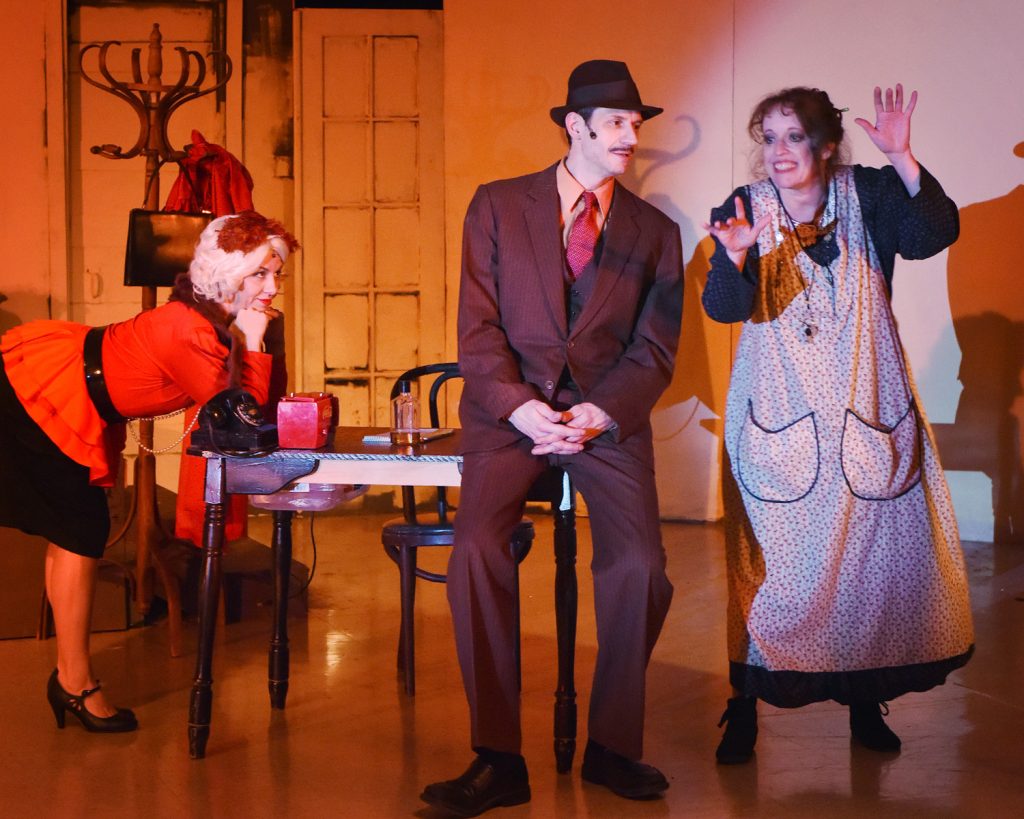 Amanda Gardner plays Rooster’s partner in crime, Lily St. Regis. She added a comedy overtone to that part of the plot, and did a fine job, as well.

The role of President Franklin Roosevelt is played in this show by Skip Bugenig. He played two smaller roles, as well, but it is his turn as our 32nd President that I want to mention, in particular. Mr. Bugenig’s accent was great, but it was one other thing that proved his mastery of the role. When it came time for his curtain call, I was surprised he could get out of the wheelchair. Now, THAT is acting.

“Annie” means an orphanage, and an orphanage means that there are plenty of kids on stage. The kids were all good, but we wanted to take this chance to congratulate young Alyssa Kusherets on her performance as Molly. We had a chance to meet her after the show and she could not have been more delightful. Her program bio says she has wanted to be on the stage since she was one, and that she is “living her dream.” What a joy it must be to be living one’s lifelong dream before you’re nine. Excellent work, Alyssa.

Paradise’s itinerancy would have scuttled some theaters, but not this one. Its loyal following finds the productions and shows up over and over again. Doubtless they would follow this place into the Pacific Ocean if need be. That’s a tribute to this plucky little operation. Is Paradise’s “Annie” worth capacity crowds and thunderous applause? Why, it would be positively Rooster-ish of us to say otherwise. That’s why we’re glad it is an enjoyable evening (or Saturday afternoon) at the theater.

Oh, before I go. There is a line in the play in which Daddy Warbucks says to Lily, “Find out what Democrats eat.” In Port Orchard they eat enchiladas at Aceitunos, and you should as well.

After the New Year, Paradise will be back for five more great shows. We know that three of them will be in this same space, but after that… However, there isn’t a cloud on the horizon that can take this theater company down. In fact, we predict that the sun will come out tomorrow for Paradise. Come see Annie, maybe twice, and support an organization that makes the neighborhood better, just by being a part of it.