A Light in the Piazza-Lovely and Light

Love at First Sight-To Trust it, or Not to Trust It-That is the Question.

Love at First Sight, is it simply lust or is it a psychic signal with chemical/hormonal ramifications and messages, which somehow unconsciously tell us that this could be the one? or one of the ones? Although romantic love rarely lasts given the realities of everyday life, it is such a strong emotion that Freud once said that it induced a near psychotic state in those afflicted with it.

On a more positive note, it can also be a signal that one really should marry the object of romantic love, because, aside from practical reasons, the best motive for marrying someone can be if you cannot imagine a future without them. If the motives are that strong, it can be worth the risk. This is the theme of the highly romantic musical The Light in the Piazza, a concert reading staged by ShowTunes Company, staged at the Cornish Playhouse.

Piazza, adapted from a novella by Elizabeth Spencer, was developed right here in Seattle in 2003 by Bartlett Sher at Intiman Playhouse with music and lyrics by Adam Guettel. After 36 previews, the Broadway production opened in April 2005 in Lincoln Center. It won multiple awards and has been staged throughout the English speaking world, most recently in London at the South bank’s Royal Festival Hall with Renée Fleming.

In many ways, it is old-fashioned, in that it takes a basic boy-meets girl plot with all its various permutations; obstacles from his family, her family, hidden secrets and of course the most romantic setting of all-Florence, Italy, but love and hope triumphs in the end. A very normal Southern woman, Margaret Johnson, played expertly by Billie Wildrick, takes her grown daughter, Clara, played by Carly Marie, to Florence, Italy, where an accidental meeting with a Florentine young man begins a series of proposals, negotiations, serious internal difficulties on the part of the bride’s mother, serious misgivings, based on cultural/traditional beliefs, on the part of the groom’s father, disapproval on the part of the bride’s father as well as a ever increasing dowry.

The real star of the show is the bride’s mother, Maragret Johnson, who has a very complex character with oodles of unresolved issues in her own marriage, guilt about the accident, which happened to her daughter on her 12th birthday, leaving her somewhat developmentally disabled. Billie Wildrick played her to perfection, including an authentic Southern accent. What was so intriguing was that her character was not a rebellious person, nor a particularly unhappy one, but just a fairly normal, middle of the road married woman of her time, but she showed courage and made a brave choice for her daughter.

Carly Marie as Clara was adorable, willful, charming and the audience fell in love with her innocence. The supporting cast were equally engaging: including Allan Fitzpatrick as Signor Naccarelli , the epitome of the Italian pater familias, Ellen McLain, his witty but wise wife, and Danielle Barnum as the sexy but unhappy daughter-in-law. 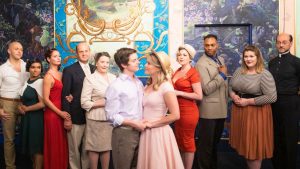 The Showtunes production was a “concert/script in hand,” which, in my opinion, rather enhanced the experience because one was not distracted by a set. One could sit back and merely enjoy the exquisite music, under the direction of Nathan Young, and the superb singing of the outstanding cast. I particularly liked the mid-sized orchestra being on the stage. Although there was no set, director Kelly Kitchens added some highly creative touches and brought the witty dialogue to life with wonderful comic timing.