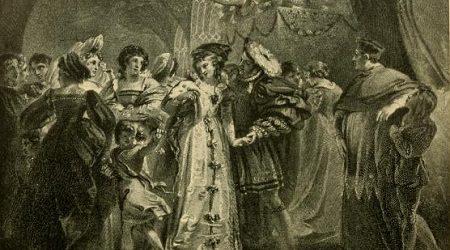 Watching Last Leaf Productions’ “Henry VIII,” I realize Shakespeare in the Park is an unfortunate medium. Often crowded by noise, with no theater to contain and dim sound, with planes and park-goers passing by, the form stymies both comprehension and immersion. Couple that with Shakespeare’s dense poetry, and the whole thing starts to feel haphazard at best. Woefully, these factors greatly hindered Last Leaf’s latest.

“Henry VIII” is one of Shakespeare’s histories, telling Henry’s marriage to Katherine Parr and affair with Anne Boleyn. Given that it’s Shakespeare, it obviously rises above simple retelling. At 90 minutes, Last Leaf’s show is condensed from the original text, which was something of a mercy considering the difficulty of simply hearing what was being said.

I sat fairly close to the stage, but issues of simple projection from the entire cast frustrated throughout. Last Leaf is a small company, putting on a free show, so I don’t mean to harp too much on the cast’s abilities. Still, the play failed to invite me in, feeling ramshackle and particularly victim to the medium’s shortcomings. Great Shakespeare in the Park makes the most of its limitations and evolves past them. Last Leaf did not.