Iconic Tacoma Little Theatre is at the end of its 100th season of shows. Every show this season is one that has been seen before in the last century. This has been a fun romp down through history, greeting some classic shows and becoming reacquainted with some masters in the art of script writing. The staff and management of TLT chose Noel Coward’s “Hay Fever” to finish off the season. It is a classic, and it was treated with respect by some veteran actors who know their way around stylish dialogue.

The plot of “Hay Fever” is an interesting one, but it takes a back seat to the skilled actors saying the words. It was said about Katherine Hepburn in “The Philadelphia Story,” that her accent was not New York and not London, but from somewhere in the middle of the Atlantic Ocean. So it is in this show about the idle rich, toying with and ultimately tormenting weekend houseguests.

The hosts for the weekend festivities are the Bliss family. Or, to be clear, 75% of the Family Bliss.

Young Sorel and Simon Bliss, played by Deya Ozburn and Rodman Bolek respectively, appear to do very little other than take up space. Simon, in particular, has mastered the art of the sprawl.

Ms. Ozburn and Mr. Bolek are two of the South Sound’s most accomplished actors. Each is a multi-award nominee, and they both appear to be having a great time in these slight roles. Hearing them play off each other, and off of the other actors in the show, is a treat for the audience. Does either character show personal growth from the start of the play to the end? Not a whit, and nor should we expect them to show such a thing. Personal growth is so tedious, darling. It’s hard enough to stylishly smoke a cigarette when the holder is longer than a Cadillac’s bonnet. Say that in an upper-crust accent, and you will have grasped the offspring of Judith and David Bliss.

The kids came by their careless ways, naturally. Judith is played to a perfect note by Jane McKittrick. Once an actress of some renown (at least in her own mind) Judith clings to glories past, imaginary, exaggerated, or real. She raised two kids in an atmosphere of perfect indolence without realizing her responsibilities to them. Ms. McKittrick’s performance is an excellent one. Faded glory and remembered beauty are winning roles.

The roles of houseguests/playthings for the Bliss family have some of the meatier roles in “Hay Fever,” and they are played by an All-Star cast. Frank Roberts’ Sandy Tyrell is smitten by Sorel Bliss. That makes him a poor sap in the eyes of the audience. Mr. Roberts does a lovely job in the role and earns at least his share of the laugh lines. The necktie that became a headband in “the other room” was a nice touch. 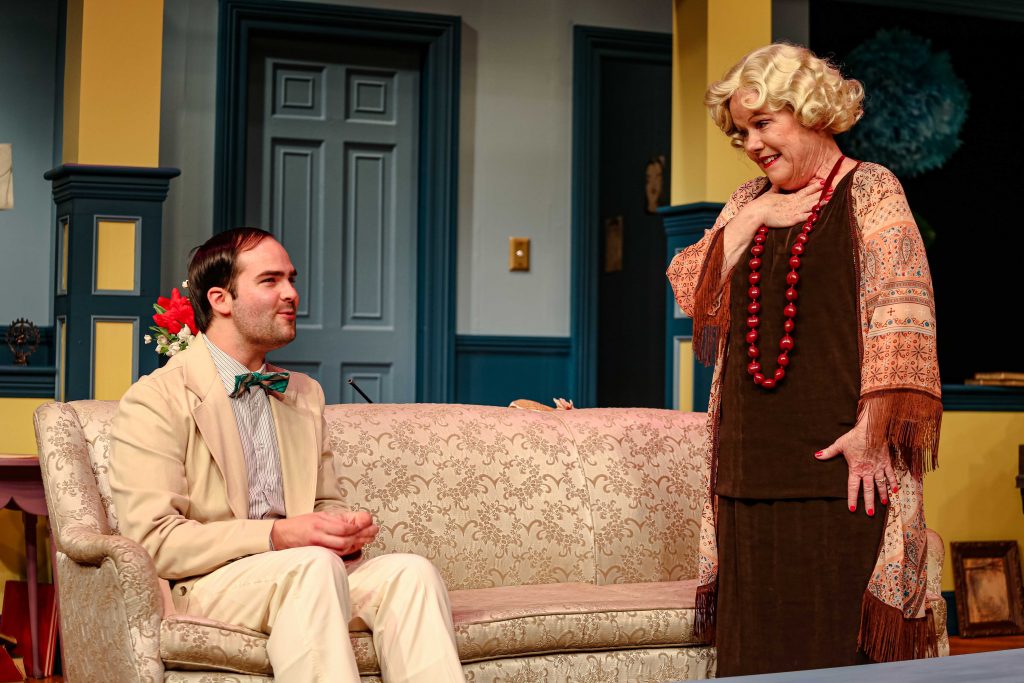 Devan Malone’s Myra Arundel is willing to be titillated to a point, but she’s too savvy to fall for someone who is insincere. As such, she plays along with the madness and flirtation cooked up by the Bliss’. But, she never truly buys into it and observes the whole thing with a wry smile. To walk that tightrope with ease takes a skilled actress. She was great.

Jill Heinecke is a critical favorite. She first came to our attention in the TLT comedy, “The Fox on the Fairway.” Later, again at Tacoma Little Theatre, she was great in “The Man Who Shot Liberty Valance.” She has become a valuable South Sound actor and seems particularly at home on the TLT stage. In this show, her Jackie Coryton is ill-prepared for the casual torment the Bliss kids dish out, and Jill Heinecke plays Jackie with a touching vulnerability.

W. Scott Pinkston is known for wringing the last bit of content out of every role he tackles. Anyone who saw him in Lakewood Playhouse’s “Angels in America” will not soon forget his performance there. As Richard Greatham in “Hay Fever,” Mr. Pinkston plays a diplomat in a decidedly undiplomatic space. He is aghast at what goes on around him and performs the role stylishly.

In the Bliss family, Dad is rarely seen. (A choice I would make too if I had that wife and those two kids.) But in his short time on stage, John W. Olive’s performance was top notch.

Have you ever seen a play and thought, “I wouldn’t want to have brunch with any of these people!” To a greater or lesser degree, everyone we have discussed to this point in Hay Fever fits that description. That leaves Clara, as played by Adrianna Littlejohn. A member of the over-looked servant class in the Bliss household, Clara could teach her employers a great deal about how to treat others, and overall how to be decent people. Unfortunately, they are too self-absorbed to change. Ms. Littlejohn is excellent and (for those of a certain age and who can remember) plays her role in a manner reminiscent of Marla Gibbs’ Florence Johnston in “The Jeffersons.” Adrianna Littlejohn is one of the treats in this show.

One hundred years is a long time to be a fixture in the community, so Drama in the Hood celebrates with Tacoma Little Theatre in her centennial year! We imagine the hundreds of thousands of people who have played roles, supported the players, attended the shows, or pounded a nail in a set in this building. For this show alone, Blake York and his crew built a set so solid it looks permanent. Michele Graves did her usual standout job dressing the players, Nic Olson lit the show, and Jeffery Weaver formed early 20th Century hairstyles and put the things on the set for the actors to pick up and put down. Its all done in the service of, and in honor of, community theater, because here would this town be without TLT?

To answer that question, we’re recommending you see this show, but also to support Tacoma Little Theatre in its quest to take “The Pillowman” to Pennsylvania for Nationals where it will likely ravage the award table. Also, make plans to purchase a season ticket to Year 101 at 210 N. “I” St. It’s going to be a fine season, as well.