Crimes of the Heart-Hidden away in Woodinville

Hidden away among the vineyards and the beautiful scenery is one of Woodinville’s treasures; the Woodinville Repertory Theatre, a professional theatre, which has mounted a stellar and I do mean stellar production of Crimes of the Heart. Directed by Jane Ryan, with an outstanding cast including, Gemma Quackenbush, Megan Becker, Lori Hunt, Niki Flynn, Connor Kinzer and Rob Girffin, it was one of the most entertaining plays I have seen in a long time.

Written by Beth Henley, Crimes of the Heart was first produced at Actors’ Theatre of Louisville, that source of so many award winning plays, in 1979, before winning numerous awards on Broadway. The 1986 film, starring Sissy Spacek, Diane Keaton and Jessica Lange, was nominated for best screenplay.

Taking place in a small town in the South, where a family has resided for a few generations, the play definitely reflects Southern values, and social customs. An external event, the youngest having created a public scandal, brings the three grown sisters of the Magrath family together on the eldest’s 30th Birthday.

During the course of two days, the three sisters come to terms with the traumas of their childhoods: being abandoned by their father, their mother’s subsequent suicide, being pariahs in a small town and their own petty jealousies and general difficulties adjusting to adult life. Along the way their bicker, dance a tango of denial but eventually unite against the town’s gossip –their first cousin, Chick. Eventually they find ways to deal with the past and support each other positively.

It is also HILARIOUS and not just because of the script, but also because the actors were all incredible comedians with excellent comic timing. The director, Jane Ryan, had just the right touch to bring out the seriousness and the comedy. Standing out from the stellar cast was Gemma Quackenbush, whose ability to turn the most banal lines into something uproariously funny was simply amazing. She was a joy to watch. 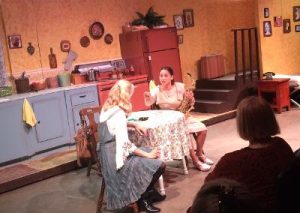 Set in the 1970’s there were a lot of period touches: a rotary phone, and the set by Steve Cooper, had a vintage copper colored refrigerator and stove. Costumer Christy Curino picked out all the right clothes for the era, which also revealed the personalities of the characters. The social-climbing town gossip, first cousin Chick, played expertly by Niki Flynn was always exquisitely decked out in vintage lady-like 70’s dresses and heels.

Middle sister Meg Magrath’s outfit was perfect for a free-wheelin-70’s-escapee from a small town, who lived on the West Coast-East Indian dresses and faded blue jeans. The audience knew that elder sister Lenny was uptight and an early candidate for spinsterhood by her dowdy dress and flat tie shoes. Little sister Babe, played by Quackenbush was all innocence and not quite grown-up, in her sandals and little girlish dresses. Adding to the 70’s nostalgia was Hjalmer Anderson’s sound track, which was full of great 70’s music from Laura Nyro to Creedence Clearwater Revival.

All in all, it was a wonderful, heartfelt production and I urge everyone to get Season’s tickets. If you do not live in Woodinville it is worth the drive and there is plenty of free parking.