America is filled with iconic and highly recognizable families – the Kennedys, the Flintstones, Beyoncé and Jay-Z. Not least among them is the Addams Family. Originally created by cartoonist Charles Addams in 1928, the Addams clan and their trademark spooky ooky-ness have made their way into every medium imaginable – New Yorker cartoon, Scooby-Doo guest stars, screens both large and small, and lastly a full-fledged musical. It is in this final iteration that the Edmonds Driftwood Players have taken full advantage of the familiar and pervasive images of this macabre clan on the stage of the Wade James Theater. 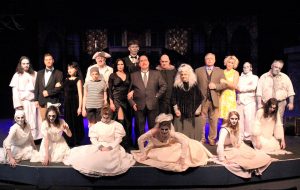 At its heart, The Addams Family is not an unfamiliar tale. Part Romeo and Juliet and part coming of age/family drama, what sets this musical apart is the truly funky cast of wackos. The show begins with an extensive exposition dump which, while informative, makes it harder to invest in the story and the individual characters. We learn that a grown-up Wednesday is in love with a man of whom her parents (in particular, her mother Morticia) would most definitely not approve due to his excessive normalness. Wednesday’s predicament puts her beleaguered father, Gomez, in quite the difficult spot. He spends most of the show being pulled into opposite directions wanting to please his daughter and be true to his wife which, of course, means he does neither and pleases no one. After some negotiations, cajoling, and unbridled teen angst, it is decided that the object of Wednesday’s affections, Lucas Beineke, along with his parents Alice and Mal will be joining the Addams family for diner. What follows is a night filled with confessions, shenanigans, and no small amount of tangoing. The action is helped along by a sincerely sweet Uncle Fester and a horde of ghoulish ancestors recently raised from the dead. In the end, it turns out no one is actually normal and it is only when we accept the odd in everyone (including ourselves) that we can find love and affirmation.

As the heads of the family, Gomez played by Doug Knoop and Tamara C. Davis as Morticia take on most of the difficult task of moving this at times clunky plot forward. Knoop has the look and demeanor down and never lets the character turn to caricature. And the relationship between Gomez and Wednesday is both grounded and beautiful. There are times that I wished some of the energy and pizzazz of the iconic Gomezes that have come before would find its way into his performance. Davis as the dead-pan matriarch must walk the very delicate line between stoic and wooden. There were moments when she erred on the wrong side of that line though we were quickly brought back in by showy numbers like “Just Around the Corner” and “Live Before We Die” where Davis was really able to shine. 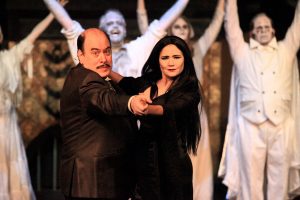 Megan Acuna and David Naber as the young lovers Wednesday and Lucas had a fantastic chemistry and their bright, dynamic voices blended splendidly together. The supporting characters in this nutty family is a murderer’s row of funny. Richard Wright as the sentimental Fester fully understands the genre and takes full advantage of it. As the crotchety Granny, Jennifer Price does not allow a single moment to go unmined for a laugh. Jacob Livingston as towering (and surprisingly wise) Lurch and Catherine Craig as the severely masochistic little brother Pugsley both fully embrace the bizarre and strange inherent in their characters. Filling ably the roles as the outside observers are Hayley Baudrau Gaarde and Jeff Strom as the “ordinary” couple Alice and Mal. The rousing (and arousing) torch song Gaarde delivers at the end of Act I is both a surprise and a delight.

Under the direction of Carissa Meisner Smit, the visual elements are executed to perfection. Thanks to a gorgeously macabre scenic design by Brian Lechner, lighting design by Chrystian Shepperd and Kristina Maier killing it on costume design, the pictures created onstage meet and exceed every expectation one has of an Addams Family musical. Additionally, choreographer Elizabeth Posluns takes full advantage of the gruesome and ghastly Ancestors (and their spectacular makeup) to fill out the unnatural world. 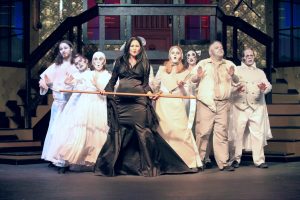 The Addams Family is playing through May 5th at the Wade James Theater. For tickets and more information, please visit www.edmondsdriftwoodplayers.org.