Ah, those were the days, as long as you overlook racial and gender inequality that make today’s inequality look like child’s play. Those were the days when men and women “changed for dinner” even though they were resplendent in the clothes they already sported. It was a day when the rules of flirtation were clear. Men wore fedoras like they meant them, and women wore gowns even if it was to sit on the “divan” and sip a martini. It was a Golden Age of theater, as well, and it is an age that Tacoma Little Theatre does better than any other playhouse around.

“Laura” is noir, lushly brought to life by Director Randy Clark. Drama in the Hood saw it Saturday night of Opening Weekend, with a near-capacity crowd who generously supports their favorite theatre. It all made for a throwback night, enjoying a show meant for this very crowd.

Mr. Clark’s crew did a lovely job staging this show. Dylan Twiner’s sound and Niclas Olson’s lighting set a perfect mood for a whodunit. The Blake York set, similarly constructed to TLT’s “Fox on The Fairway a couple of years ago, has a solid and permanent feel to it, a point in favor of Mr. York’s crew. Jeffery Weaver styled and set the hair and, voila’, it’s 1946 all over again.

Laura is dead, or is she? That’s the question that plagues the early minutes of the show. In what may be a deadly case of mistaken identity we meet Victoria Ashley. A graduate from Southern Mississippi University, Ms. Ashley immerses herself in the day and age of this show. Oozing with casual and entitled class, Victoria Ashley moves about the stage as if hearing Glenn Miller in her head. She’s beautifully dressed and carries off her role with a grace that shouts, “I smell good, too,” to the back of the house.

Equally gorgeous is Rodman Bolek, but Mr. Bolek’s McPherson is rumpled and smells less tasty than Victoria Ashley. We know that, because he’s a rumpled cop looking for clues. We mentioned Fox on the Fairway earlier, and that’s one of several shows Rodman Bolek has performed on this stage. Over his time in the South Sound he has captured the audience’s attention, and his McPherson will only burnish his resume’ of fine and believable performances. Very nicely done.

Ben Stahl plays Waldo Lydecker in “Laura.” Mr. Stahl has played several roles on this and other South Sound stages, all to acclaim. He’s good as Waldo, only occasionally crossing the line from drama to melodrama. Mr. Stahl’s next few theater gigs will include directing and playwriting. We look forward to the mark he will make in those arenas, too. 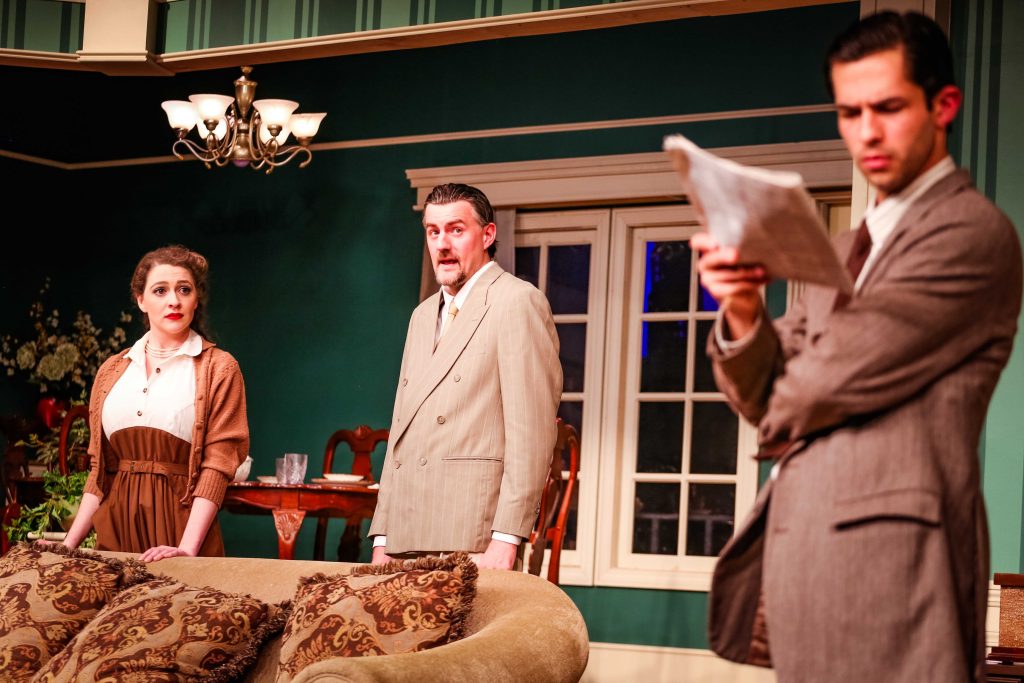 Pacific Lutheran University graduate Joel Thomas plays Danny Dorgan. The youthful Mr. Dorgan is well-cast as a young adult in need of being taken seriously. He burns with desire for the female lead, but his overarching emotion is frustration. Mr. Thomas is a fine actor who will soon be taking on lead roles.

Robin McGee and Valeria Sanchez-Jiminez play Mrs. Dorgan and Bessie Clary respectively. Part of the servant class as Bessie, Ms. Sanchez-Jiminez is subservient, but nevertheless shows what she is thinking about the actions going on around her. She’s subtle and effective. Ms. McGee does a very fine job, as well.

Randon Wech’s Shelby Carpenter stand in enchantment to Ashley’s character (stand in line, fella). He is her fiance’, even though she isn’t necessarily a fanatic about fidelity. Mr. Welch plays his part with the requisite grace and style for which it calls.

This is a professional cast, and mistakes were hard to find, save for one. When Rodman Bolek says the name of a baseball player from the era, the name should be pronounced Lav-a-Jet-Oh.

This is Tacoma Little Theatre in the midst of its 100th season. All such theaters deserve support, but another theater’s centennial celebration won’t be seen in this town for another 20 years, when Lakewood Playhouse turns 100. Join the fun at TLT, and see “Laura.” It is a throwback show well worth your time and a spot on your calendar. Fedoras for the gentlemen and gowns for the gals? Nah, come in comfort. You’re welcome at Tacoma Little Theatre. Come see the show!