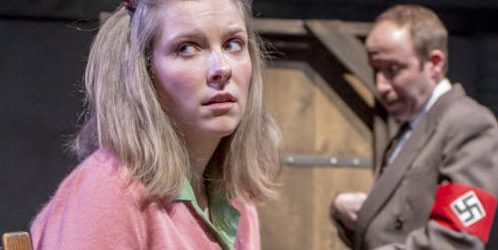 In 1943, a small number of German university students, their friends and family formed a group, calling themselves The White Rose. They passed out leaflets decrying the atrocities committed by the Hitler regime. Hans Scholl and his sister Sophie were caught by the Gestapo while passing out their sixth newsletter at the University of Munich. Meyers has his play begin the day after their arrest.

Amy Helms does the heavy lifting here, portraying the 21 year-old Sophie.  Costume designer Kelly McDonald has her wearing green and pink pastel colors, a vivid contrast to the gloom of the stark grey walled interrogation room imagined by set designer Mark Lund. As the play opens, Sophie denies any involvement with the rebels. She is soon confronted with a tempting option: name names and go totally free! I was reminded of William Styron’s novel Sophie’s Choice and that Sophie’s heart-wrenching dilemma. Evil times seem to demand hellish quandaries.

Helms ably portrays a young woman at her wit’s ends. She knows her brother (an earnest Ben Wippel) may have his life depending on the decisions she makes. Later in the play Sophie will be both mentally and physically tortured, as the Nazis seem intent to make her brutal treatment an inspiration to others. Helms is equally proficient showing the horrible toll her body has paid in the seemingly endless interrogation sessions. She believably teeters on the borders of consciousness near the end of the play.

Jonathan Stutzman is Kurt Grunwald, the highly conflicted interrogator. His part is the only fully fictional character in Meyers’ play. His cynical pragmatism forms a startling contrast to Sophie’s youthful idealism. Grunwald has lost a son in the war, has no real love for Hitler and is very aware that Germany is on the brink of a devastating defeat. Yet he insists on finding meaning in the societal structure offered to him, explaining to Sophie “The law is the law.” He points out that the fall of Hitler would not ensure a better Germany at this late date of the battle. Grunwald confidently points out that no one will ever remember Sophie and her possible sacrifice. Why bother playing a hero when one could walk out and enjoy the incipient springtime weather? He passionately desires that Sophie follow his path, meeting the least resistance at every turn. Stutzman makes fine use of this meaty roll, providing a fascinating foil to Sophie.

In a dream-like visit from her brother, Sophie will waver in her resolution, earnestly wanting to choose life over self-sacrifice. The moment Grunwald demands that she sign an affidavit denouncing the resistance and  claiming her allegiance to Hitler brings to mind John Proctor in the dramatic climax of Miller’s The Crucible. Both heroes must undergo the ultimate sacrifice to stand up against the madness swirling all around them. Linking the Meyers’ play’s themes to today, in his program notes, Producing Artistic Director Scott Nolte expresses the hope that “Sophie’s story….prompts us to vigilantly guard justice and our freedoms.”

We Will Not Be Silent runs through April 27 at the Taproot Theatre, 204 N 85th Street in the heart of Greenwood. For more ticket information go to taproottheatre.org or call 206-781-9707.