Mountain climbers have Mt. Everest. Captain Ahab had his whale. For the opera world, there is Giuseppe Verdi’s Il trovatore now playing at McCaw Hall. With a complicated, somewhat melodramatic plot and aria after aria of some of the most demanding music in the canon, it is a work not to be taken on by the faint of heart.

Based on the play El trovador by Antonio García Gutiérrez, Verdi’s opera boasts some of the most sensational and tragic characters in a genre replete with sensational and tragic figures. He also wrote four of the hardest roles in opera for the quartet of principles at the heart of this elaborate plot. It is a tangled web full of triangles of both love and vengeance. 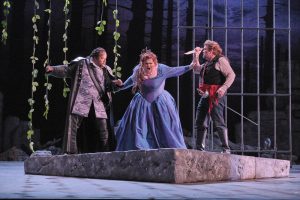 At the point of the love triangle is Leonora, a lady in the castle, played by the dynamic Leah Crocetto (the role is sung on alternate nights by Angela Meade). Crocetto is returning to the Seattle Opera stage after a triumphant turn in Aida. She is just as versatile in this role. When she sings the opening strains of Tacea la notte placida, there is a sweetness and naivate to her sound. By the end of the aria, she has become a woman, diving throughout her range and even reveling in some of the lower, chesty notes. This does not take away from the absolute control and force she has in the soaring notes required of the role. As the titular troubadour Manrico for whom Leonora longs, is Arnold Rawls (sung alternately by Martin Muehle). His sound is bright and agile. Rawls is at his best when paired with Crocetto. Their voices blend so beautifully together, it is easy to be drawn into their love story even as the world is crumbling down around them. 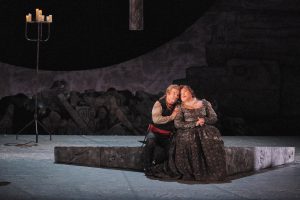 The darker, thornier side of this triangle is Lester Lynch as Count di Luna (sung alternately by Michael Mayest). Lynch was seen last in another villainous role as Crown in Porgy and Bess and he brings even more nuance and depth to this turn on the stage. While there seemed to be a ceiling to his range, he found the meat of his sound where it really counts and the lower and more powerful parts of his voice. Singing what Verdi himself considered the principal role of the opera is Elena Gabouri as Azucena (sung on alternate performances by Nora Sourouzian). As the mother of Manrico and the target of di Luna, much of the plot hinges on Azucena’s actions both past and present. The role requires so much both dramatically and vocally it seems almost insurmountable. Gabouri manages to move deftly from the broken, traumatized woman, to the daughter maniacally seeking vengeance for her wrongly accused (and ultimately burned at the stake) mother, to the mother fiercely protective of her son. She does this all while blowing the roof off of the opera house with some seriously powerful mezzo-soprano fireworks. It is clear why di Luna and his men fear her and feel they must villainize her so. 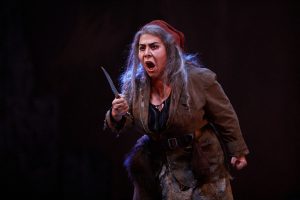 This challenging score was deftly executed by the stellar orchestra under the incredibly capable baton of Carlo Montanaro. Director Dan Wallace Miller did a wonderful job staging this complicated opera so the action was clear and the storytelling explicit and captivating. The sets (originally designed by John Conklin), while beautiful in their bleakness, may have been over complicated and required lengthy set changes that interrupted the momentum of the plot. The costumes, though also originally designed by Conkin were taken to another level by Candace Frank. 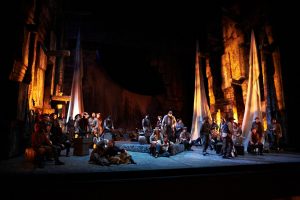 Il Trovatore is being performed at Marion Oliver McCaw Hall through January 26th in Italian with English captions. For tickets and more information, please visit https://www.seattleopera.org/tickets/