‘Scrooge! The Musical’ No Humbug for Tacoma Little Theatre

The holiday season is a wonderful time of year for community theater groups. The crowds are generally large and appreciative. Holiday shows are well-known and, often enough, repeat performances for the actors. It might even be the right time to mail in an effort, knowing that the bonhomie from the audience is enough to take you over the top. Luckily, Tacoma Little Theatre is not in the business of mailing in shows. They opened “Scrooge! The Musical” this weekend and put forth a more than solid effort. This show is a good addition to anyone’s holiday calendar.

Directed by Michael O’Hara, this show combines veteran presence with youthful enthusiasm. The large cast sings well, and the choreography by Eric Clausell resulted in some really fine movement on stage. Set designer Blake York’s staff put together a construct that gave added depth to the large TLT stage to the point that one could imagine the streets of Greater London where Tacoma’s North J St ought to be. The artistic staff should be congratulated as everything from the set to Jeff Weaver’s props, hair, and makeup worked to make the whole a smashing thing, indeed (To put a British bowler on the matter.)

Lead actor performances are often hailed as “grand,” lovely,” “brilliant,” and, in rare cases, “tour de force.” Drama in the Hood doesn’t throw that last one around, as it is due only to the rarest of performances. Less often, will a theater review call a performance “courageous.” However, “courageous” is due the performance of Andrew Fry in the role of Ebenezer Scrooge. Mr. Fry was sick all week leading up to Opening Night. The rasp in his voice told the tale of the toll his illness was taking on his singing voice. Yet, he soldiered on like the trouper Mr. Fry is, all the way through the first act.

Then, in Act Two Mr. Fry’s Scrooge found a second wind. Whether it was cough drops, a shot of brandy, or a laying on of hands during intermission, something gave him the ability to perform toward the top of his game. Mr. Fry found the strength he needed to sing “A Better Life,” and followed that up with a powerful rendition of “I’ll Begin Again.” It was one of the best examples of playing in pain Drama in the Hood has ever seen. Kudos and wild applause, sir.

Tacoma Little Theatre’s Managing Artistic Director Chris Serface is larger than life. He’s a large man, with a large smile, and a larger laugh. He is a delight to be around and, in the role of The Ghost of Christmas Present, Mr. Serface’s larger-than-life persona is made to order. No one in this show has any more fun than does he, and that fun had to start when he donned the outlandish costume built for him by the costuming staff as led by Michele Graves. It looks like Times Square as imagined in a Bedouin boudoir next to the Casbah. Doubtless, the costume was part of Mr. Serface’s fine performance, but his efforts were more than worthy of his attire.

Kathy Kluska’s Ghost of Christmas Past, and Alan Plaster’s Ghost of Christmas Yet to Come were also excellent. Ms. Kluska is a critical favorite in the South Sound and is forever up to whatever role she develops. Mr. Plaster performed well in all four parts he played, showing off an excellent range.

Jeremy Lynch’s Bob Cratchit was really good. Mr. Cratchit is a poor man with a noble persona and Mr. Lynch trotted out Cratchit’s nobility on several occasions, but also his interaction with the Cratchit youngsters were some of the best parts of the show.

There is a large ensemble in “Scrooge! The Musical” and a standout performer was Allie Watkins in the roles of Isabel, the Baker, and Ensemble. Ms. Watkins is one of the really fine dancers in the show, flinging herself about with abandon. As Isabel, the woman who got away from Ebenezer Scrooge she shows heart, as well as heartbreak, A really fine effort throughout the show by Ms. Watkins. 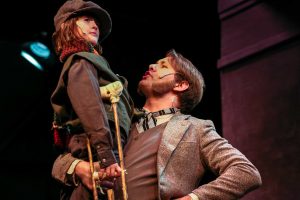 In the Charles Dickens source material, the final line is said by Tiny Tim Cratchit, when he utters his famous line. More on the famous line in a minute, but we must first discuss Evie Merrill’s performance as Tim. Miss Merrill does a beautiful job! In her cast bio, Evie says, “I love TLT and my theater family.” Well, Miss Merrill there was no one in the joint Opening Night who didn’t send that love back to you. Your Tim may have been Tiny, but the character you gave him was great.

Which brings us to our tiny quibble. Remember the last line in the Dickens story? Didn’t it just feel delicious when Tiny Tom said, “God Bless us…every one?” The musical, even with its production numbers and intricate dance steps, should end the same way. Mr O’Hara, I think you have one more job.

“Scrooge! Is an ancient story of redemption, but it has an even greater significance today. Ebenezer Scrooge is a 1 per-center that lives a miserable and lonely existence until he opens his heart to those less fortunate. Drama in the Hood’s Christmas wish is that hearts that need to be so opened may be, so that we can all have a Merry Christmas and a Happy New Year. Is that too much to ask? Maybe so, but the people who put together this play don’t think so. Therefore, neither will we through the run of this production.

Centerstage’s ‘Let There Be Love” a Deft and Clever Work
February 4, 2020
© 2022 Drama in the Hood. All rights reserved.
Site Design