There was some ugly business in New York City 119 years ago. Violence broke out when newsboys were gouged by wealthy newspaper barons out to add to their coffers. The boys went on strike. Think of the eternal battle between the working stiff and the one-percenter. What made this struggle noteworthy, though, is that the working stiffs got, if not a win, at least a propitious draw. Yes, there was blood on the hands of both sides and the whole thing was rather un-Disney-like.

However, this class struggle caught the eye of The House of Mouse nonetheless, and “Disney’s Newsies” was born in 1992. Loosely (at times quite loosely) based on the newsboy strike, the movie became a hit. Translated to the stage it is one of the most popular shows on the community theater circuit, playing in several South Sound venues over the next nine months. Tacoma Musical Playhouse got the first crack at it, opening the show Friday, Sept. 14. As they often do, TMP set the bar for other theaters to clear pretty high, presenting a fine night of theater with “Disney’s Newsies”. Drama in the Hood was there for Opening Night.

Too often, dance and choreography are fifth or sixth paragraph additions to a theater review, as vocals and acting takes the spotlight higher on the page. Let that not be the case this time. Choreographer Megan Hicks, take a bow! Your hoofers were a highlight to this show and deserve acclaim early and often. The cast, 36 strong, spun, leaped, and shimmied for two hours plus and nary a step was missed. There were many quality dancers showing off their best moves, but two, in particular, need extra recognition. Summit Geiselman (Specs) and Timothy Joyce (JoJo) drew gasps and applause as they whirled and leaped into the hearts of the crowd.

Jake Atwood starred as Jack Kelly. At the show’s beginning, Kelly has one foot in New York City and one foot in Santa Fe, New Mexico. Kelly has never been to New Mexico, but its rumored wide-open spaces and cleanliness contrasts in Jack’s mind with gritty NYC. Brash and bold with a heart of gold. That’s Jack Kelly and it is Jake Atwood’s sweet spot as a performer. His pugnacious jaw arrives on the scene five minutes ahead of the rest of him and Mr. Atwood’s hard work on stage is evident in his every action. His acting has never been better. Jake Atwood has a fine singing voice, but some of this show’s frequent tenor range was out of Atwood’s baritone comfort zone.

That would turn out to be a frequent thing in TMP’s production of “Disney’s Newsies.” The dancing was magnificent, while most of the vocals were fair to pretty good. That said, two singers stood out. Colin Briskey’s Davey sang very well. He was particularly good when singing the softer and more heartfelt songs. Mr. Briskey is a critical favorite and did nothing to tarnish his rep as a fine young actor who is improving every time out. 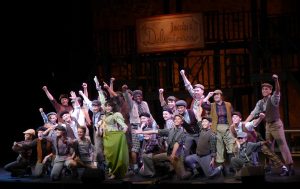 The cast of Disney’s Newsies celebrates a victory for the newsboys. Photo credit Kat Dollarhide.

But, the singing star of the night was in the person of Ashley Koon, who played the female lead, Katherine. Ms. Koon is another one of the rising young performers who make South Sound theatres such wonderful places to visit. Last season she was under consideration for an award for her role in “Pajama Game” at Centerstage Theatre. Katherine is a bigger part, requiring greater stage range. Ms. Koon cleared every hurdle and her clear, strong voice carried the notes that needed to be carried.

Sam Bennett makes his Tacoma Musical Playhouse debut in the role of “Crutchie.” Mr. Bennett deserves multiple kudos. His acting was very believable, and it couldn’t have been easy to manage that crutch during chaotic dance scenes. He is a new actor to the South Sound that we hope returns again and again. They say you only get one chance to make a first impression, and Sam Bennett made a very good first impression in Disney’s Newsies.

“Jake Atwood starred.” That’s what we just said. Why then, was the eye drawn to another actor when he shared the stage with the star? Because 10-year-old Howy Howard played the daylights out of the role of “Les!” Young Mr. Howard drew critical applause last season when he was “Chip” in Beauty and the Beast. His star shone just as brightly as Les. He nails his lines, sings the songs accurately and on key while watching more experienced movement actors for his movement cues, mimicking them beautifully and, mostly, right on time. A star in the making is born.

(Kudos to Jake Atwood for catching Howy when he nearly fell off the table. That could have turned out poorly for the lad.)

Three supporting players did a really nice job in this show. Deanna Martinez Neidlinger played Medda Larkin (It really should have been “Meadow.” What a great name that would be. Someone get me re-write!) Ms. Neidlinger is one of the South Sound’s most versatile actors and was really good in this show. The talent in the Neidlinger family is deep. Johnny Neidlinger was effective in three different roles, and, according to the program, Malia Neidlinger is a costume assistant for this show. Talented lot, those Neidlingers.

John Munn, Managing Artistic Director at Lakewood Playhouse, came across town to be in this show. He played newspaper (or “pape,” as the newsies call them) magnate Joseph Pulitzer. Mr. Munn never fails to put on a fine performance when he deigns to be on stage.

Tacoma Musical Playhouse combines new tech with old school as well as any theater from Seattle to San Francisco. The use of a live orchestra is a wonderful touch and the musicians, under the expert direction of Jeffrey Strvtecky, added a lot to this show.

The house was nearly packed to the rafters for “Disney’s Newsies,” Opening Night. Make plans to attend. You’ll get a tiny bit of history, but it will be enough to make you look up the real story. Moreover, though, you will get a cast of three dozen working their papes off for your entertainment. What’s better than that for an evening on the town?