Silhouette has Substance and Style to Spare 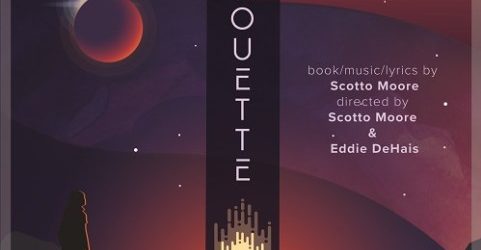 Silhouette Has Substance And Style To Spare

I think we’ve all encountered at least one moment in our theatergoing careers when the endless restaging of classic shows has worn a little thin. If my arbitrary projection of my own gripes onto you happens to ring even slightly true, allow me to recommend a production by the name of Silhouette, currently playing at Capitol Hill’s Annex Theatre. As an original science fiction acapella musical, Silhouette immediately stands out against the backdrop of a local theater scene steeped in Shakespeare and Tennessee Williams. Now of course, distinction on its own is not enough to carry a production. Which is why I’m very happy to report that Silhouette packs enough dramatic heft on its own merits to entertain a far broader audience than merely fans of the above genres.

For some brief context, Silhouette chronicles the journey of a star pilot named Aurelia, played by Miranda Troutt, who dreams of one day serving in the larger fleet in a combat role. On a scouting mission, Aurelia’s ship becomes badly damaged, and she eventually crash-lands nearby the hidden settlement of Silhouette, a village populated by a group of drifters who all seem to possess an ability to wield a strange magical energy, and who all are varying degrees of mistrustful of both Aurelia and her reason for being in Silhouette (if you feel like I’m using the word silhouette too much, be prepared for the show to repeat it ad nauseum as well). The inhabitants imprison Aurelia, prompting a spy-vs-spy game as both sides attempt to deduce what exactly the other wants.

This production comes to us from writer and co-director Scotto Moore, the playwright behind When I Come To My Senses, I’m Alive!, and Can’t Talk Right Now. The reason I bring this up is that, as his track record shows, Moore is no stranger to either sci-fi or small-cast theater, and his familiarity shines through in Silhouette’s superb character work. The lion’s share of stagetime naturally goes to Aurelia and deuteragonist Miranda, played by Mandy Rose Nichols, but Silhouette is a large town, and its inhabitants make ample use of the time they’re given. Credit for that is by no means solely Moore’s. From Aviona Rodriguez Brown as the hardline village sentinel Sally to Arika Gloud as the more conciliatory healer Nadia, the majority of Silhouette’s supporting cast exemplify distinct, varied, and immediately recognizable personalities from their first line. This isn’t completely universal, there are three minor roles who are left with a half-dozen lines between them and are promptly forgotten about (I don’t even recall their names being mentioned at any point), but for a space opera revolving largely around the relationship between only two people, the effectiveness of the side cast was immediately impressive, and a worthy showcase for all involved.

And don’t think that’s because those two people were falling down on the job by comparison. Aurelia and Miranda are both dramatically rich roles, and the two women portraying them take full advantage of that. Nichols has a particular talent for communicating a painter’s palette of emotions with a single stoic expression, something that comes through extremely well in the Annex’s smaller, more intimate theater space. Her performance in that regard appears to take a few cues from Sigourney Weaver’s turn as Ellen Ripley in the Alien films: a hardened combat vet with a soft side very few ever see, yet is just barely perceptible even when she’s at her coldest. Aurelia, for her part, is nearly the complete opposite, which makes Miranda into an excellent foil for her. Aurelia is young, idealistic, and for the majority of the play, very, very out of her depth and fearing for her life. And Troutt consistently lands a very facially and vocally intensive performance with aplomb.

The musical inclination of the cast seems to have been doled out in a similar fashion as well. Some characters receive more demanding and more impressive solos than others, but the singing and musical direction in Silhouette is absolutely solid across the board. Personally, I found Nichols and Brown to be the standouts, but that might just be because I’m a sucker for good vibrato. And once again, one can attribute some of that impression to them being assigned more vocally demanding songs. Speaking of which, those songs…………might be slightly off-putting to some people. As I said, there’s very little to reproach execution-wise, but lyrically, a good number of these songs buck typical musical theater conventions. Some lack traditional refrains, and a number of them don’t even rhyme, as they’re essentially just dialogue set to music. Whether those stylistic elements bother you will come down to personal preference. Fortunately if they do, not all the songs in the book follow this pattern, so the average audience member ought to find at least one tune that clicks with them. Take it from me, I’ve been humming the refrain from “Flying In Circles” the entire time I’ve been writing this.

That stylistic quirk about the music brings me nicely to my personal favorite element of the production, that being the design motifs themselves. My fellow science fiction nerds ought to find plenty to recognize here, as Silhouette wears its visual inspirations on its sleeve. Quite literally, in fact. The costuming for the show revolves largely around simple robes and flightsuits that could have stepped straight out of Star Wars or Stargate, and the futuristic setting is further amped up by some absolutely phenomenal lightwork and sound design. The action is constantly rendered in high relief by deep chromatic reds and blues coming from the single overhead light, and the fact that a proud geek like myself couldn’t pick out a single soundbyte as being reused from a more famous source speaks to some superb curation work on part of sound engineer D.R. Amromin. From curtain up to down (well, lights up to down, the Annex doesn’t have a proscenium), Silhouette looks and sounds alien, strange, and consistently awe-inspiring.

There’s very few elements I could pick out from Silhouette as being legitimate flaws. There were a handful of tripped-over lines here and there, which will almost certainly be ironed out as the production continues to run. And again, if heavy sci-fi or acapella really aren’t your cup of tea, then this may not be the show for you. But, speaking as a fan of both, I walked out of the theater very pleased. This is what a universally talented group of people firing on all cylinders looks like.

Read other reviews by Kyler Cantrell