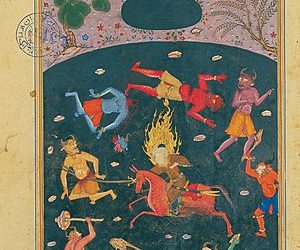 Crewmates starts off full steam ahead, goes off course.

For those of us who have had to navigate courtship and relationship foreplay with foreigners, Crewmates, the off-night play at Annex Theatre, in the Pike/Pine Corridor exposes all the embarrassment, missed signals, cultural differences, conflicting expectations and hilarity of such relationships. Just to up the ante Crewmates’ author, Sameer Arshad, did not depict your average, American undergraduate on a junior year abroad courting a European (which is relatively tame) but a young man raised in a strict Muslim family, and a biological Japanese young lady adopted by a Filipino-American couple.

The conflict between the two characters, Faraz played by Ajinkya Abgul, and Sarah, played by Carol Tagawa, is observed by a team of angels sent to watch over them. Within the crew of angels there is a Islamic hardliner, who believes it is highly irregular for a couple to even kiss on the cheek or arrange their own marriages, others crewmates are more accepting of changing mores. In the end, when the couple finally consummates their love, the crew is judged.

The strength of the play was in the witty dialogue and the basic premise, which was realistic and a minefield of humor, cultural conflict, dramatic tension and ultimately enlightenment. The weakness of the production was the direction, the blocking, that is to say-cramming the large cast into a small narrow space, the set, the costumes, and neglecting to correct the actors who faced upstage when they were speaking, instead of towards the audience.

Although the author told me that it was the first time on stage for some of the actors, I really couldn’t tell which ones, as they all seemed quite capable, the flaws in the staging could have been easily rectified. Since I have spent a lot of time teaching people from the Indian sub-continent, have personal experience of the misunderstandings of inter-cultural courtships, I jumped at the chance to see this play. In short, I was disappointed by the production, but not the script

Some of the actors who stood out were Carol Tagawa as Sarah, the Japanese-Filipino American courting the shy Muslim boy, Priyanka Bhardwaj, as one of the “Angels”, Modessa Jacobs an Angel who was also double cast and Morgan Lerner, the illegal immigrant who is resurrected as an Angel. .

The author Sameer Arshad is extremely talented, his dialogue was to die for, many of the actors had charming British/Indian accents, the exposition of the play was swiftly executed and involved the audience immediately. I personally would love to see a different production of this play.

Script Tease- Magnificent, Stupendous, Outstanding and every other superlative
May 9, 2017

Something Incredible-Annex’s Research and Development Wing
May 4, 2017
© 2020 Drama in the Hood. All rights reserved.
Site Design