“Bent,” a 1979 play by Martin Sherman, is a powerful piece of writing about the treatment of the gay community during the rise to power of the Third Reich. The Changing Scene Theatre Northwest opened this show this weekend on the Dukesbay stage. Over the course of two hours, the audience is run through a wringer of emotion. There is humor, but it is NOT  a comedy. There is one song, but it is NOT a musical. There’s love, but it is, for the most part, not a love story either. Rather, “Bent” is an unflinching look at cruelty, and the degrading way the powerful can treat those under their heel. Its set in a time of war clouds on the horizon (Specifically, just before World War II), but “Bent” has a timeliness to it that is almost eerie.

Max and Rudy are roommates and lovers. One of the two (Rudy) is faithful and into the relationship. Max is a free spirit, prone to dissipation, drug use, and random hookups with strangers. The show opens with Max needing a refresher course on the debauchery of the previous night. One might believe that a raunchy sort of “The Odd Couple” may be about to take place. Then, the action takes a decidedly dark turn. The Third Reich didn’t look kindly on homosexuality, and they are jackbooting it to Max and Rudy’s house.

Nick Fitzgerald plays Max and his turn is memorable! It is said that an actor’s performance can be measured by the emotional distance he believably takes his character.  Mr. Fitzgerald takes Max to the moon and back, and he never wavers in his commitment to the character. To say that the Max who appears at the end is not the Max at the beginning is an understatement. The audience walks the road of truth and indignity with Nick Fitzgerald and never, not once, believes he is anyone other than he portrays. Fitzgerald’s performance is worth the price of admission.

As Rudy, Jason Quisenberry is great, as well. On a train to Dachau, the SS decides to make an example of Rudy in an effort to flush out his and Max’s homosexuality. That Mr. Quisenberry can play Rudy as a bon vivant and a victim of horrific abuse in about 15 elapsed minutes of real-time shows stage skill. The audience roots for the underdog, perhaps none more so than Rudy. Very well done. 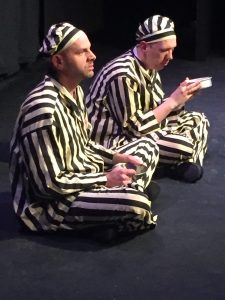 Along the way, Max meets Horst, and they become friends. As guinea pigs in the Third Reich’s experiment to prove that mindless labor can “cure” homosexuality, these two work next to each other 12 hours a day. Desolation begets desperation that begets a relationship that can only end in one direction or the other. In such a setting these two must love or hate. How Max and Horst work it out is stage brilliance.

Deep down Corey Thompson’s Horst knows how this story ends. But, that doesn’t stop him from seizing the brass ring of humanity while on a carousel of unimaginable despair. It is within his reach for the ring that this story finds its climax. Horst managing a shared act of physical love is a victory of sorts, but Horst’s triumph is embodied in a much smaller gesture at the end of the show. Less is more and Corey Thompson nailed more with less!

Joseph Magin’s and Paul Sobrie’s tasks in this Pavlina Morris directed show are thankless ones. If they succeed in their portrayal, the audience will want to punch them in the throat. Their performances are very well done. One hopes they have health insurance.

In two smaller roles, Eric Cuestas-Thompson is an important part “Bent.” While he was good as Uncle Freddie, Mr. Cuestas-Thompson’s turn as a nightclub singer named Greta was really moving.

There are shows on South Sound stages that one should see because of the production values and the entertainment value. The Changing Theatre Northwest offers production values in “Bent”, all right. In fact, it is the best show TCSTN has staged in at least three years. But “Bent” deserves to be seen because it is an important piece of work holding a mirror to mankind’s inhumanity to mankind. The cast and production crew will forever share a bond for being in “Bent.” They deserve full houses watching them work.

While there is a significant amount of adult material in “Bent” one hesitates to hamstring it with a rating that would exclude younger folks who need to know history. Let’s call it 14 and up. This is a story that needs to be shared. Perhaps now more than ever.