All’s fair in love and war at Seattle Opera

The landscape of performance and visual art is replete with tales of love and war and their consequences. Perhaps none is matched in scale, beauty, or popularity than the opera Aida composed by Giuseppe Verdi with a libretto by Antonio Ghislanzoni.

Aida premiered in Cairo in 1871 to great acclaim and since then has been performed all over the world (the New York Metropolitan Opera has had well over 1,000 performances since 1886). With such a rich history, any mounting of a production of Aida comes with expectations of a certain amount of pomp and circumstance. Seattle Opera (along with Washington National Opera, San Francisco Opera, and Minnesota Opera with whom they have partnered for this current staging) has managed to strike the perfect balance between the grandiose bombast of a war story and the smaller, intimate stories of love, jealousy, and duty.

We begin with Radamès, an army officer, awaiting a promotion in hopes that it will lead to a marriage with his love, Aida, a captive slave girl to Amneris, daughter of the King. In a cruel twist, Princess Amneris is in love with Radamès and is not so keen on the idea that her slave could win in this particular love-triangle situation. Radamès is eventually chosen to lead the army into battle and is cheered on by the chorus with a rousing battle cry of guerra, guerra, guerra! (War, war, war!). Aida is left alone onstage to work out her feelings of love for Radamès against her love of the family and home which he is aiming to conquer. 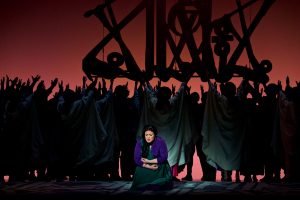 Radamès returns victorious and brings with him a group of prisoners including (unbeknownst to everyone) Aida’s father, the King. As a reward for a job very well done, he is granted the hand of Amneris in marriage. With the odds quickly and exponentially stacking up against our two lovers, they decide to meet in secret to discuss their future. A few secret battle plans are overheard by Aida’s father resulting in a charge of treason against Radamès and a mad dash attempted escape for Aida. Unfortunately, this story ends the only way a tragic story of love and war can. Our lovers are united at last though it is only to die in each other’s arms.

In a story with stakes this high, it requires some true masters of voice and drama and, for the most part, this production did not disappoint. In the title role of Aida was Leah Crocetto (sung on alternate performances by Alexandra Lobianco). Crocetto has a crystal clear, luminous soprano voice that can be, in one moment, magnificent and tremendous and, in the next, extremely delicate. Opposite Crocetto is Brian Jagde as Radamès (sung on alternate performances by David Pomeroy). Jagde was able to bring a deep sincerity to the role, even in the most grandiose moments, while still maintaining the powerful trumpet-like tenor needed to portray the leader of an army. Crocetto and Jagde are reprising their roles from the San Francisco staging of this same production and it has clearly served to enhance their chemistry. They are never more genuine than when they are together. 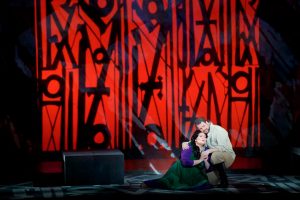 As the perpetually unrequited Amneris is Milajana Nikolic (sung on alternate performances by Elena Gabouri). In the first couple of acts of this story when jealousy is her driving force, she is believably commanding and connieving. In the latter half of the opera, when more of the extreme dramatic moments are hinged in her, she is somewhat less successful and the incredibly difficult vocal line suffers. As the proud and manipulative Amonasro, father to Aida, Gordon Hawkins (sung on alternate performances by Alfred Walker) is dynamic and complicated which is all mirrored in his rich baritone. Daniel Sumegi returns to the Seattle stage as Ramfis and brings all of the necessary gravitas needed to be a high priest as well as the gorgeous bass voice we have come to expect from him. Some of the brightest moments came from the roles of the Messenger sung by tenor Eric Neuville and the High Priestess sung by soprano Marcy Stonikas. Both managed to make a very strong impression with very little time or material.

Now, what would Aida be without a little spectacle? While this production does not have elephants or pyramids, it uses the performers onstage and off to devastating effect to create all the pageantry needed. The choreography by Jessica Lang was executed beautifully and added an entirely new dimension and a whole extra layer of storytelling. Particular highlights include scene 2 of Act I where the dancers are otherworldly and the fog onstage is almost another member of the dance troupe as well as the children dancing at the beginning of Act II. They are acting out the battles they hope to fight as adults and are completely delightful. The orchestra, under the baton of John Fiore, utilizes magnificently, all the colors of the music from the most ethereal opening tones of the strings in the overture to the grandest fanfares. The chorus, under Chorusmaster John Keen, is mighty and accomplished and carry out some of the best battle and triumph anthems in the business. 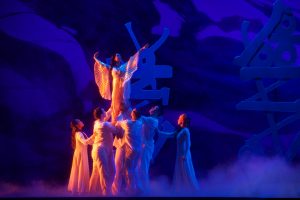 In the original libretto of Aida there is time period specified. The themes of violence, love, and overzealous patriotism (and the consequences inherent in them)  belong to every generation. This staging has taken that idea and infused it into every element the production. The vibrant costumes designed by Anita Yavich look to be from non-specific “olden days” with some contemporary twists. The stunning set by Scenery Designer Michael Yeargan and Artistic Designer RETNA are covered in patterns that seem to be at once extremely ancient writings and modern graffiti. All of these elements come together flawlessly to emphasize the timelessness of a story written almost 150 years ago. 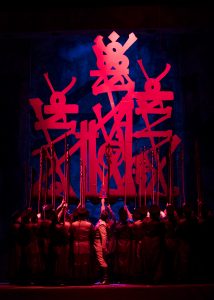 Aida is playing at Marion Oliver McCaw Hall through May 19, 2018 in Italian with English captions. Evening performances are at 8:00 PM and matinees are at 2:00 PM. For tickets and more information, please visit https://www.seattleopera.org/ 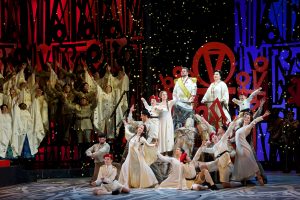