This is all to Director Blake York’s credit…or blame, depending on your perspective. Mr. York saw “The Pillowman” on stage in Chicago and brought it home to Chris Serface, Managing Artistic Director at Tacoma Little Theatre. Mr. Serface greenlighted the project and “The Pillowman” opened on the TLT stage this weekend. It is 144 minutes of taut drama, interspersed with occasional humor. But, it is an uncomfortable humor, a guilty laugh. “Why am I laughing at this? Am I a sick and perverse person?” “Ha, Ha, good one!” From the book by Martin Mcdonagh, this show has a dramatic arc unlike any other show seen on South Sound stages in recent memory. Fascinating? {Insert bad word here} Yes! Disturbing? To anyone with a soul. Worth seeing? Secure your tickets now.

This play is set in timelessness. The sets are stark, the location unclear. The audience walks into a disturbing image on stage. As they take their seats their eyes are drawn to a man, sitting on a bed. The man is a prisoner, with his head covered. Audience and critical favorite Jacob Tice is the man (and credit to him if he doesn’t fall asleep in the half hour plus his head is covered.) Thus begins a tale of unholy cruelty. There is cruelty in flashback, as well as before us on the stage in current time. Madness, as well.

Mr. Tice’s performance is the best of his career to date. There isn’t a shred of “maybe” in that sentence. His portrayal Katurian K. Katurian is without blemish! Jacob Tice could get by with his to-die-for speaking voice, and mail in a performance. Not that he ever has, but he could. However, his sonorous basso profundo is almost an afterthought in this show. His character is a storyteller and beguiles us with a charming telling of horrific tales. We are lured in, only to be smacked in the mouth. Mr. Tice is transcendent. 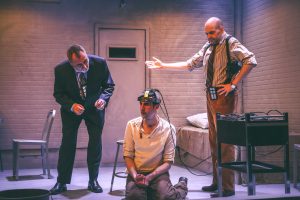 Katurian spends much of the show under interrogation from police officers Ariel and Tupolski, played by Christain Carvajal and Andrew Fry, respectively. Bad cop, good cop, also respectively. Mr. Carvajal’s Ariel seethes every moment. His anger at the things he has seen in his long career as a cop leaks out of his pores. He is about fighting crime, but he also gets his jollies beating suspects. Carvajal does a splendid job.

Andrew Fry’s Tupolski is nuanced. Everyone knows he is playing the role of “Good cop,” but his voice, eerily reminiscent of comedian Norm Macdonald portrays an avuncular tone. Indeed, an audience bludgeoned by Christian Carvajal’s Ariel needs a good cop. But, Tupolski isn’t a hail-fellow-well-met. He’s as cruel as his partner, only better dressed. Andrew Fry has never met a play he hasn’t improved by his presence. He is one of the South Sound’s most-reliable character actors.

Katurian, Tupolski, and Ariel are on-stage from the get-go. Sean Neely’s Michal shows up later, but “The Pillowman” takes a turn from his first moments on stage. After we meet Michal, at once, Katurian seems both more and less guilty. It is said by wise ones that black and white are lies because we are all etched in shades of gray. Michal is to Katurian what Lennie is to George in “Of Mice and Men.” He’s raison d’etre and antagonist. He brings out the gray in his brother. Sean Neely is great in a role that could easily be carried over the top. It is his (and Director York’s) deft hand that holds Michal on the ground. He has fewer lines than Carvajal and Fry, but his impact on this show is equal to theirs, at the very least.

Young Alexandria Bray is a delight to watch perform. In this show, much of her work is in silhouette, a great choice by York in how to portray what Ms. Bray’s “Child” goes through. She received critical praise when she played in “Gypsy” on this stage. She has the “it” factor to grow into a wonderful stage actress.

Tacoma Little Theatre flyers for this show call it a “13 and up” production. Let’s call it “15 and up.” That isn’t because of the language, which is rough. After all, kids hear all of this, and worse, in the halls of local high schools. But, the long-term intensity and subject matter could be daunting for young teens. A child flayed and crucified, even in shadow, could leave a mark on a young audience member.

That said, if you are old enough to drive a car, you should see “The Pillowman!” Unlike anything else you will see on a Washington State stage this year, it would be a shame to miss. Don’t make Drama in the Hood send Christain Carvajal to your house for an attitude adjustment, because it won’t go well. Little that he touches does.